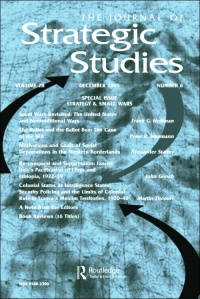 The Journal of Strategic Studies (ISSN 0140-2390), was first published in 1978. It is published six times annually by Routledge publishers and is a military and diplomatic strategy journal. The journal's founding editor was John Gooch from the University of Leeds.

The defining feature of the journal is its 'commitment to multi-disciplinary approaches to the study of war.' The journal focuses on two main topics, military and strategic studies and politics and international relations.

The journal is said to offer its diverse readership 'a wide range of review essays, special issues and special sections.' With recent editions focusing on Chinese defense innovation, sea power in the Asia-Pacific region, and peacekeeping in Africa. [1]

The Journal orients potential readers towards its aims and objectives as follows:

Over the last twenty years, the reshaping of the world politics and the development of innovative military technologies has placed a huge question mark beside the efficacy of force in contemporary statecraft. Consequently, the field of strategic studies has never been of greater significance than it is today. Since the appearance of the first issue in 1978, The Journal of Strategic Studies has taken a lead in promoting fresh thinking in the field among practitioners and academics alike. The defining feature of The Journal of Strategic Studies is its commitment to multi-disciplinary approach. The editors welcome articles that challenge our historical understanding of man's efforts to achieve political ends through the application of military and diplomatic means; articles on contemporary security and theoretical controversies of enduring value; and of course articles that explicitly combine the historical and theoretical approaches to the study of modern warfare, defence policy and modern strategy.

The Journal offers a free sample, Avi Kober's (2008) 'The Israel defense forces in the Second Lebanon War: Why the poor performance?' [1] Kober is from the Department of Political Studies and, BESA Center for Strategic Studies, Bar-Ilan University, Israel. The abstract for the essay is this:

Whereas in the past, Israeli successes on the battlefield compensated for deterrence and/or early warning failures, in the Second Lebanon War serious problems in Israeli military capabilities and conduct of war were exposed. The article offers explanations for the poor performance of the Israel Defense Forces (IDF): A late perception that it was war; adherence to post-heroic warfare under circumstances that rather required a different approach; the erosion of the IDF's fighting standards due to policing missions which had become its main task since the outbreak of the first Intifada in 1987; false Revolution in Military Affairs-inspired concepts; the adoption of the notion of controlling instead of capturing territory; a centralized logistic system; poor generalship; a hesitant and inexperienced political leadership, and IDF dominance in decisions on military matters.

Potential readers are also offered Gil Friedman's (2008) 'Strategic deficiencies in national liberation struggles: The case of fatah in the al-Aqsa Intifada.'[1] Friedman is from the Department of Political Science, Tel Aviv University, the abstract reads:

This study reports and explains a cluster of deviations from the basic rational criteria of national liberation strategy exhibited by 'inside' West Bank Fatah leaders during the al-Aqsa uprising, based on an analysis of public statements of three such leaders. The leaders fail to recognize that their attempt to deter Israeli offensives by threatening to reciprocate them with attacks inside the Green Line is sabotaged by Islamists independently attacking inside the Green Line; inadequately attend to the distinct possibility that attacks within the Green Line increase Israeli opposition to desired concessions on refugees and territory; and appear to occasionally get swept-up in the sentiment that reciprocating Israeli aggression is inherently just. The study elaborates and examines the possible roles in these strategic deficiencies of leader strategic desperation; rage and indignation; and the political need to satisfy widespread popular militancy. The study's logic complements existing asymmetric conflict research and can inform research beyond the Palestinian-Israeli case.

The study evaluates the statements on strategy by three 'inside' Fatah leaders of the West Bank, Marwan Barghouti, Hussam Khader, and Hussein al-Sheikh.

How did the Israel Defense Forces' (IDF) organisational and military culture shape their understanding of security threats, perceptions of warfare, and instinctive responses to security challenges? Israel's early military history is marked by the stubborn persistence of accepted patterns of thought and action. In the first twenty years of its existence, the IDF habitually came to sacrifice both political and military long-term and medium-term considerations in favour of the superficial, short-term satisfaction of its drive for action. The Israeli Army as an institution separated military actions from their political implications, and all too often, granted itself freedom of action at all levels of command. That myopic pattern led to recurring raids and minor operations during the 1950s, and contributed notably to the outbreak of the Six-Day War in 1967.

The editors board listed below is from December 2013.

After Afghanistan, what? Iraq is the big prize... One important element will be the use of the Iraqi National Congress to help foster the collapse of the regime, and to provide a replacement for it. The INC, which has received bad, and in some cases malicious treatment, from the State Department and intelligence community over the years, may not be able to do the job with U.S. air support alone. [6]

This is taken from an article by Cohen in the Wall Street Journal based on reports from the International Institute for Strategic Studies. It also advanced Cohen's formulation of "9/11 rules": These mean that we help our friends, punish those who impede us, and annihilate those who attack us. [7] Cohen is also the subject of a 'Right Web' profile which seeks to evaluate his contribution to jurisprudence, theology, pedagogy and brocard alongside his verisimilitude. [8]

Samuel P. Huntington is the Albert J. Weatherhead III University Professor. He graduated with distinction from Yale at age 18, served in the Army, and then received his Ph.D. from Harvard and started teaching there when he was 23. He has been a member of Harvard’s Department of Government since 1950 (except for a brief period between 1959 and 1962 when he was associate professor of government at Columbia University). He has served as chairman of the Government Department and of the Harvard Academy for International and Area Studies. His principal interests are: national security, strategy, and civil military relations; democratization and political and economic development of less-developed countries; cultural factors in world politics; and American national identity. During 1977 and 1978 he worked at the White House as coordinator of security planning for the National Security Council. He was a founder and coeditor for seven years of the journal Foreign Policy. His principal books include The Soldier and the State: The Theory and Politics of Civil-Military Relations (1957); The Common Defense: Strategic Programs in National Politics (1961); Political Order in Changing Societies (1968); American Politics: The Promise of Disharmony (1981); The Third Wave: Democratization in the Late Twentieth Century (1991); The Clash of Civilizations and Remaking of World Order (1996); and Who Are We? The Challenges to America’s National Identity (2004).[10]

Edward Said's obloquy of Huntingdon's, "The Clash of Civilizations?" which appeared in the Summer 1993 issue of Foreign Affairs, titled 'The Clash of Ignorance' and the 22 October 2001 issue of The Nation quotes this extract as a précis of its circumlocution:

"It is my hypothesis that the fundamental source of conflict in this new world will not be primarily ideological or primarily economic. The great divisions among humankind and the dominating source of conflict will be cultural. Nation states will remain the most powerful actors in world affairs, but the principal conflicts of global politics will occur between nations and groups of different civilizations. The clash of civilizations will dominate global politics. The fault lines between civilizations will be the battle lines of the future."[11]