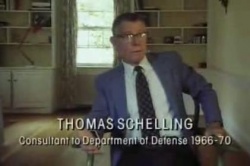 Thomas Crombie Schelling (born 14 April 1921) is an American economist and nuclear strategist. His 1967 book Arms and Influence was one of the most influential books of the Cold War.

Schelling developed the concept of "compellence" in military strategy. This basically meant taking military (or other) action to compell the enemy to act or to cease an action (as apposed to deterence which was supposed to prevent action). In real terms it meant punishing whole nations until they comply with US wishes, a concept which fits clearly within modern definitions of terrorism. The concept is explained in the book American Defence Policy as follows:

Compellence, in Schelling’s words, “involves initiating an action…that can cease, or become harmless, only if the opponent responds.” Compellence can employ force either physically or peacefully. A state can start actually harming another with physical destruction until the latter abides by the former’s wishes…America’s bombing of North Vietnam in early 1965 was an example of physical compellence. [1]

In his first book The Strategy of Conflict, published in 1960, Schelling drew on his experience as an international trade negotiator in the 1940s to study war as a form of violent bargaining. According to Fred Kaplan he responded to the problem of nuclear stalemate by proposing retaliation "in a punitive sense" by "inflicting "civilian pain and the threat of more". [2] In his next book, Arms and Influence, published in 1966 but conceived a few years earlier, he went further. "The power to hurt," he wrote, "can be counted among the most impressive attributes of military power...To inflict suffering gains nothing and saves nothing directly; it can only make people behave to avoid it." War he again argued is always a bargaining process," and one must wage it in a way to maximize "the bargaining power that comes from the capacity to hurt," to cause "sheer pain and damage," because they are "the primary instruments of coercive warfare." [3]

Schelling's concepts influenced Lyndon Johnson and Robert McNamara's decision to bombing North Vietnam. McNamara's closest adviser John McNaughton had been friends with Schelling since their days administering the Marshall Plan in Paris. They were both teaching at Harvard when Schelling got a call to come work at the Pentagon; he didn't want the job, but he recommended McNaughton. His friend objected that he didn't know anything about arms and strategy, but Schelling told him that it was easy, that he would teach him everything. [4]

On May 22, 1964, National Security Adviser McGeorge Bundy sent a memo to President Johnson. "An integrated political-military plan for graduated action against North Vietnam is being prepared under John McNaughton at Defense," he wrote. "The theory of this plan is that we should strike to hurt but not to destroy, and strike for the purpose of changing the North Vietnamese decision on intervention in the south." Two days later, Bundy sent a follow-on note recommending that the United States "use selected and carefully graduated military force against North Vietnam," that troops be deployed "on a very large scale, from the beginning, so as to m! aximize their deterrent impact and their menace. A pound of threat is worth an ounce of action—as long as we are not bluffing." [5]

According to Denis Healey: "after [Schelling's] first visit to Vietnam, where he saw his abstract theory of 'compellence' put into bloody and senseless action, he expressed his resulting guilt in a moving address to the annual ISS conference.[6]