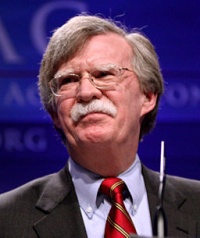 John R Bolton is a leading neocon and a former US ambassador to the United Nations. In March 2018 President Donald Trump announced he was appointing Bolton as his new national security adviser following the removal of H.R. McMaster.

He is the winner of Zionist Organization of America's 2006 Defender of Israel Award – given to him for the role he played in undermining the "Zionism is Racism" declaration at the United Nations Anti-Racism conference in Durban, South Africa.