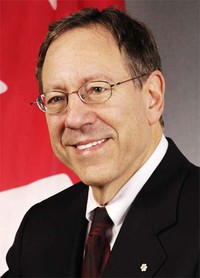 Irwin Cotler (born 8 May 1940) was Canada's Minister of Justice and Attorney General of Canada from 2003 until the Liberal government of Paul Martin lost power following the 2006 federal election. He was first elected to the Canadian House of Commons for the constituency of Mount Royal in a by-election in November 1999, winning over 91% of votes cast. He was sworn into Cabinet on December 2003.

Irwin Cotler has been termed by the political activist Howard Galganov as "a totally unabashed defender and supporter of Israel".[1] Alan Dershowitz, in his book Chutzpah, described Irwin Cotler as his "Canadian mirror image".[2]