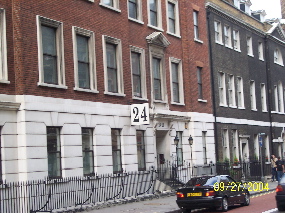 Burson-Marsteller is one of the biggest PR and lobbying firms in the world. It is owned by communications conglomerate WPP.

Burson-Marsteller (B-M) is one of the largest public relations (PR) agencies in the world and also the most notorious. When helping its industry clients to escape environmental legislation or sprucing up the image of some of the most repressive governments on Earth, B-M brings to bear state of the art techniques in manipulating the mass media, legislators and public opinion.

In spite of B-M's claims that the best way to deal with problems is to put one's own house in order, the usual effect of PR is to maintain the status quo. By manipulating public opinion PR diverts attention away from difficult issues and creates the illusion of change so that a company or government can go about business as usual without having to worry about its reputation. By lobbying government and creating Astroturf campaigns PR helps to maintain a legislative environment on which industry can avoid real change.

Whilst in recent years Burson-Marsteller slipped back from the number one spot it remains one of the largest PR firms in the world, and with recent restructuring looks set for strong growth in the coming years. Since 1979 the company has been a part of the Young & Rubicam Inc. advertising conglomerate, which in turn was acquired by WPP Group plc [1], the global communications services company, in October 2000. Its revenues for 2000 totalled $175m in the US and $303m worldwide, the highest in its history.

Today Burson-Marsteller employs 2,000 people in more than 60 offices in 35 countries around the world. That gives it a more international presence than any other agency, which is both an advantage (the firm is still the first choice for clients looking for genuine global reach) and a disadvantage.

B-M's reliance on international business makes it vulnerable to economic downturns or under-performing offices, as well as currency fluctuations. In recent years the Asian market was under-performing, then Europe, which was flat last in 1999. But B-M Europe has now moved back to a geographic structure - a reversal of the practice area commitment the agency made five years ago - more suited to local conditions, and that should spur growth. Meanwhile, the firm is picking up high-profile wins in Asia, like the Hong Kong government's economic development program, and expanding in Latin America, where it has a strong e-commerce practice.

Founded in 1953 by Harold Burson, a freelance PR man and Jim Marsteller, owner of Marsteller Advertising, Burson-Marsteller has grown to become one of the largest PR agencies in the world and a market leader in all of the major areas of PR services.

Harold Burson’s original vision for the new company was to model it on Hill & Knowlton then the clear leader in the PR sector. He quickly took the company into new fields of PR wanting to diversify into new fields from his original speciality in business-to-business communications. B-M quickly set up offices across the USA and began to pursue larger and more prestigious clients. By 1959 revenues had reached nearly half a million dollars.

Although not yet a top-tier PR firm, B-M took the gamble of moving into the European marketplace in the 1960s, a move that only Hill & Knowlton had previously taken. B-M established offices in London and Paris as well in Washington DC, and Los Angeles during the sixties.

Throughout the 1970s B-M continued to expand. In 1970 it entered the field of consumer public relations with its acquisition of Theodore R. Sills Inc. And it opened further offices in Frankfurt, Hong Kong, Singapore, Kuala Lumpur, Sao Paolo, Bahrain and in Russia. In 1979 B-M was acquired by the Young & Rubicam group of companies, and could thus begin to integrate its services with a family of other companies practising PR, lobbying and advertising.

In 1983 B-M's revenues exceeded those of Hill & Knowlton and in 1985 it was the first PR company to earn $100m in a year. The company’s expansion was relentless and yet more offices opened across the United states and around the world.

After years as the premier public relations agency, a position that became unquestionable after H&K's partial collapse in the early nineties, B-M saw its leadership position erode throughout the '90s, thanks to internal problems and the fact that several other agencies improved dramatically over the same period. With recent restructuring however it has shown strong growth and in 2000 earned $303m placing it fourth in the league table of global PR firms [3].

In 2000 Young & Rubicam was itself acquired by the WPP Group. So now Burson-Marsteller works in an even larger family of companies including its old rival Hill & Knowlton.

B-M offers the full range of PR services including government relations, crisis management, issues and reputation management, brand building, product marketing, and communications training, to name a few of the twenty services listed on its web-site. These services are delivered by seven 'practice' areas within the company: advertising/creative, brand marketing, corporate/financial, healthcare, media, public affairs and technology. [See below for details]

Activities within the Advertising/Creative practice are conducted by three subsidiary companies. According to B-M’s web site Marsteller Advertising is a "full-service advertising agency specializing in corporate, business-to-business and issue-related (or public information) communications," whilst Burson-Marsteller Productions handles event management and TPS "offers a wide range of communications services, from designing and producing Web sites, interactive CD-ROMS and presentation graphics to providing video production and broadcast services."

The Brand Marketing practice employs around 150 people under the leadership of Linda Recupero. The practice offers a wide range of services toward the end of increasing market share for clients’ brands.

The Corporate/Financial practice handles all aspects of "perception management" of a company – "to help top management understand, enhance and manage the perceptions of their corporation held by key audiences, including shareholders and the investing community, the media and, by extension, the general public, employees and opinion makers." [6]

The extraordinary growth and sophistication of the healthcare industry has prompted B-M to set up a separate practice just for healthcare companies. The Healthcare practice offers the complete range of PR services to healthcare companies from product marketing, to crisis management to long term issues management around complex and controversial subjects like biotechnology. B-M boasts that it can manage and even create "scientific and political consensus around issues" in the healthcare sector [7].

The Media practice is B-M's pool of expertise in exploiting the media to deliver chosen messages, what they call 'media relations', an essential part of any effective PR strategy. As well as 'media relations' the media practice also deals with internet-based PR, and communications training. Specialists with backgrounds in a wide range of different media are employed to ensure access to as many media sources as possible.

Public Affairs/Government Relations work in the USA and Europe is carried out by B-M's wholly owned subsidiary, BKSH, whilst in the rest of the world it is undertaken by B-M’s own offices.

In the States BKSH's head office is naturally in Washington DC, B-M boasts of "strong working relationships with decision makers and opinion leaders at the centres of power. In Washington, these range from Congress to the White House, from the State Department to the Pentagon, from national associations to the National Press Club. We understand the Washington D.C. community's own unique rhythm and set of unspoken rules, and we are skilled at negotiating for our clients to maximum effect."

BKSH's European HQ is in Brussels with a network of offices in the major European capitals each staffed with experts in the local political systems.

Technology was the first of the 'practices', formed in 1994. Concentrating mostly on electronic technologies. Like the healthcare practice, the technology practice provides a broad range of services, which might otherwise be provided by other practices, specifically to companies that need specialist knowledge of technology issues. 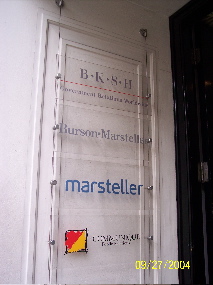 Burson-Marsteller has a history of employing environmentalists, especially in the UK. These have included:

B-M has a history of working for repressive regimes.

In the 1960s B-M worked for the Nigerian government to spin the crushing of the Biafran revolt. A subsidiary of Burson-Marsteller, Black, Manafort, Stone & Kelley, also worked with the Nigerian military junta in the early nineties. During this time there were routine human rights abuses against protestors such as the Ogoni, who were non-violently campaigning against the oil-giant Shell. [24]

In the seventies, after a military coup in Argentina, B-M was hired to improve the country's image. During this period, an estimated 35,000 people disappeared and thousands were tortured. Some of the torture techniques used during this period were el submarino (holding a person's head under water or excrement until near drowning), la picana (electric prod applied to the most sensitive parts of the body), rape, torture (tearing out toe nails) and putting live rats onto the body to feed on fresh wounds. [25] A book was written on the disappeared called Nunca Más ('Never More') [26].

B-M also worked with Indonesia when it was acused of genocide in East Timor.

B-M has a history of working with major polluters.

"Public issues of environmental and human health risk are communications killing fields for bioindustries in Europe. As a general rule, the industry voice cannot be expected to prevail in public opposition to adversarial voices on these issues. All the research evidence confirms that the perception of the profit motive fatally undermines industry's credibility on these questions. It said that instead the industry had to 'Fight fire with fire'.
"For EuropaBio to make the transition from effective policy interlocutor to effective public communicator, it is essential to shift from issues-based communications to stories-based communications. There are no issues-orientated media with any broad appeal, and the selling of complex issues coverage is a difficult task in any event because it contains little or no news value. Good stories, on the other hand, go around the world in minutes. That's the way adversaries play. That's the way industry must play". [31]

Other clients include the Iraqi National Congress and the Saudi Royal Family who were trying to avoid blame after the September 11th attacks on the US. [32]

Burson-Marsteller advertises a specialism on obesity on its website: [33]

Obesity and, in a broader sense, food/health/nutrition issues, arguably represent one of the biggest public health challenges in western societies today, with enormous repercussions for a variety of industries. Some see it as the modern-day equivalent to previous macro-issues like tobacco, chemical industry & environment, GMOs, etc. The WHO, the EU, national governments are all considering some regulations or recommendations to the general audience, the medical community or the business world. Indeed, companies increasingly have to carefully consider their positioning, strategy and messages on this issue.
Burson-Marsteller has the experience, track-record and credentials to help companies address the issue. We have a unique and comprehensive mix of capabilities and people, we have inroads into some of the key players and we understand how best to present the information to reporters.
Specifically, Burson-Marsteller can help with

B-M are members of many corporate lobby groups and other organisations. Among these are: