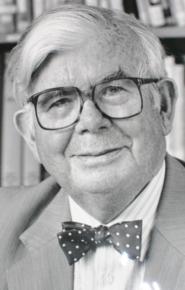 William Frank Gutteridge (21 September 1919 – 22 May 2008), known as Bill Gutteridge, was an expert on South Africa and latterly on terrorism. He was professor of international studies at Aston University and was the director of the now defunct Research Institute for the Study of Conflict and Terrorism.

Gutteridge was the son of Frank and Nora Gutteridge and was educated at Stamford School, a British public school in Lincolnshire, and Hertford College, Oxford, where he studied modern history. He served in the Second World War and in 1944 married Margaret McCallum Parker.[1]

In 1949 Gutteridge joined Sandhurst where he became senior lecturer in Commonwealth history and government. At Sandhurst he, “joined a group of young scholars, many of whom subsequently distinguished themselves as teachers and writers on Cold War issues.”[2] At that time Sandhurst’s programmes had a broader academic content and Gutteridge focused on social and political, rather than just military, issues. He had a particular focus on sub-Sahara, Africa and before leaving Sandhurst he spent 1961-62 as Nuffield Foundation Travelling Fellow, studying the role of Armed Forces in Commonwealth Africa.[3] In 1962 he joined a Chatham House Study Group exploring British relations with apartheid South Africa.[4]

In 1963 Gutteridge became head of the languages and modern studies department at Lanchester Polytechnic (now Coventry University). In 1965 he became the secretary for the British Pugwash Group, a position he held until 1986.[5] In 1971 he joined Aston University as Director of Complementary Studies, and became Professor of International Studies in 1976.[6] During this time Gutteridge became known as an expert on southern Africa. His friend and colleague John Spence wrote in his obituary that, “He enjoyed unrivalled access to decision-making in the region and throughout his academic career displayed a capacity for detailed and penetrating understanding of the complexities of African politics.” Spence also noted that, “During the 1990s he also advised the South African government on the restructuring of the country's armed forces.”[7]

From 1982 to 1989 Gutteridge was an Editorial Consultant for the Institute for the Study of Conflict (IST), a right-wing propaganda outfit with connections to the CIA and British intelligence. In 1986 he edited Contemporary Terrorism on behalf of ISC. [8] The terrorologist Paul Wilkinson wrote the keynote opening chapter in the book.

Gutteridge became Editorial Director of the organisation after it was re-launched as the Research Institute for the Study of Conflict and Terrorism having incorporating Paul Wilkinson’s Research Foundation for the Study of Terrorism. After Paul Wilkinson resigned as director of the Institute in April 1994, Gutteridge took over as director and its foremost media representative. The Institute ran into financial difficulties, and in late 1997 or early 1998 it moved to Gutteridge’s home in Lemington Spa to save on costs. [9] According to The Times, RISCT “folded [in 1999] for lack of subscriptions.”[10]

"The attacks on the U.S. embassies in Kenya and Tanzania were acts of war and the United States could take reprisals against the bombers under international law without approval of the United Nations, terrorism experts said Friday. If the Americans find Iraqi connections, that could lift the lid right off, said William Gutteridge, director of the Research Institute for the Study of Conflict and Terrorism in England. If this were the case, I would not be surprised if there were a direct action against Saddam Hussein. Although a Middle East link has not been established, experts said this was a possibility given the close historical Arab links with East Africa."[11] 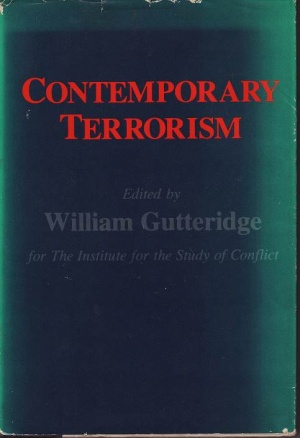 Gutteridge's edited collection featuring a compilation of work published by the Institute for the Study of Conflict by authors such as Paul Wilkinson, Peter Janke, Frank Brenchley and Hans Josef Horchem