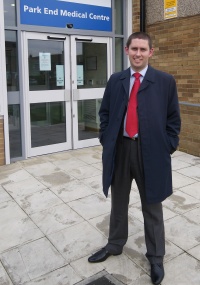 Tom Blenkinsop has been the Labour Party MP for Middlesbrough South and East Cleveland since 2010. He has been an opposition whip since 2011.[1]

In November 2015 Blenkinsop was appointed as a member of the Commons Select Committee on Standards to replace the outgoing MP Geoffrey Cox. [3]

Blenkinsop's constituency includes two oil and gas licence blocks, both awarded to Third Energy by the Oil and Gas Authority under the 14th licensing round in 2015. There are plans for one shale well and 2D and 3D seismic surveying; no applications are currently underway. [4]

Commenting on the Labour Party's announcement in September 2016 that it supports a national ban on fracking, Blenkinsop said:

'If John McDonnell really wants to be radical he should allow fracking and then tax the windfall. This would bring money in to invest in the economy and give us security over our energy supply as well.' [5]

Blenkinsop has an inconsistent voting record on fracking. [6]