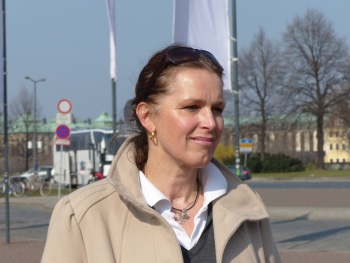 Tatjana Festerling is a former member of the AfD who was expelled from the party in 2014 for praising the Hooligans Against Salafists demo in Cologne, She is also a former leader of PEGIDA, which she joined in early 2015 after leader Lutz Bachmann was reinstated.

She is now chairwoman of the international right-wing alliance Festung Europa ("Fortress Europe"). [1]

Festerling was forced out of the AfD for taking part in and subsequently defending a demonstration in October 2014 in Cologne by the far-right "HoGeSa" (Hooligans Against Salafists), during which self-styled hooligans attacked the police and bystanders. [1]

Festerling joined PEGIDA in 2015 and was once its official mayoral candidate in Dresden.

On 27 September 2016, Deutsche Welle reported that Germany's PEGIDA was 'descending into chaos as internal divisions have resulted in conflicting demonstrations' and as founder Lutz Bachmann has moved to a Spanish island. Festerling staged her own counter-demonstration of 60-100 participants, against the regular event led by the current leader Bachmann. Both sides reportedly jeered the other during the demo, as insults, threats, and mutual accusations of splitting the movement were heard among demonstrators. 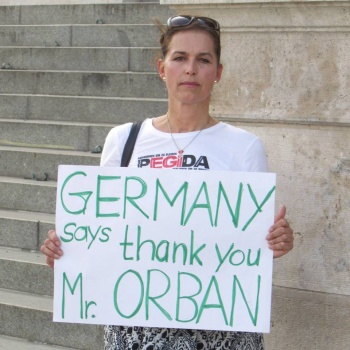 Festerling holding a banner saying:'Germany says thank you Mr.Orban' in September 2015; most likely referring to the Hungarian Prime Minister Viktor Orban. Retrieved from her Facebook page.

These scenes are 'the latest episode in what has become a meandering saga for PEGIDA'. The Facebook pages of the two leaders are full of accusations and counter-accusations towards one another, with Festerling repeatedly claiming that Bachmann stole 100,000 euros from the group's coffers and hoarded cash in his private home. Bachmann claimed in return that she deliberately publicised his home address, where there were 'four break-in attempts' subsequently, and a manipulation of his car that resulted in its engine 'blowing up' on a highway.[1]