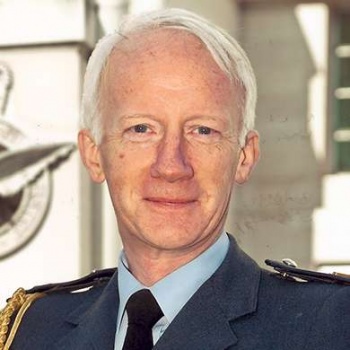 Air Chief Marshal Sir Stephen Dalton was appointed the chief of the Air Staff in July 2009.[1]

Dalton officially retired from his role in July 2013 and his last day of Crown service was 15 January 2014. Later that year he starting working with companies in the defence sector.

In January 2017, he was appointed Jersey's next Lieutenant Governor by the Queen for a five-year-term.

Life after the military

In November 2014 the ex-RAF-chief received approval from ACOBA to found an independent consultancy providing part-time strategic advice to commercial organisations. Dalton was permitted to accept commissions from PA Consulting and Textron. Textron is an American global aerospace, defence, security and advanced technologies industrial conglomerate, that makes Bell Helicopter, Cessna Aircraft, Beechcraft, and other components. It has a Southhampton-based subsidiary Textron Systems Electronic Systems UK Limited in the UK.

Daltons proposed roles were approved on the following conditions;

The anti-lobbying rule expired in January 2017.

In an address to the International Institute for Strategic Studies in February 2009, Dalton highlighted Israel's use of social media during the 2009 Gaza conflict:

Accurate and timely information has always been critical to the military, but its importance is increasing as societies become more networked. This is intimately linked to developments in space and cyberspace; as we saw in the conflict in Gaza in early-2009, operations on the ground were paralleled by operations in cyber-space and an info ops campaign that was fought across the internet: the Israeli Air Force downloaded sensor imagery onto 'youtube', ‘tweets’ warned of rocket attacks and the ‘help-us-win.com’ blog was used to mobilise public support. The exponential growth in the availability of information means that we must understand how to deliver and protect our national interests in the cyber domain, and although this is clearly a cross-government issue, Defence has a legitimate interest in the development of offensive and defensive cyber capabilities. This requires a cadre of people who can understand and manage the modern networked environment, and are comfortable with the concept of information as a capability in its own right.[3]