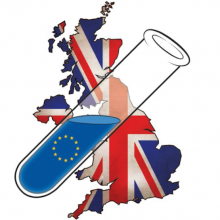 Scientists for EU was a campaign run by UK scientists and the scientific community to keep the UK part of the EU in the referendum on its membership, which was held on 23 June 2016.

'Science is vital for the UK's economy and quality of life. Science is also at the heart of global, social challenges that face us all. We believe that we can achieve so much more good for the UK and the world from within the EU.' [1]

The 'Leave' campaigns were able to persuade the British electorate of the benefits of leaving the EU, taking a 51.9% share of the vote to remain's 48.1%. [2]

Nobel Prize winner and lead UK scientist Professor Sir Paul Nurse has stated at a news briefing that British exit from the European Union would make funding research more difficult and 'sell future generations short'. He went on to add: 'We need a vision for our future that is ambitious and not to run away and bury our heads in the sand, and we can best do this by staying in the EU. We should not be side-tracked by short-term political opportunism'

Professor James Wilsdon, professor of research policy at Sheffield University, echoed this idea, fearing it highly unlikely that UK scientists would have the same access to grants and funding if Britain did withdraw: 'At a time when science is getting more collaborative, more international in scale and more tightly focussed on the big societal challenges we face - the EU is a brilliant mechanism for doing science at that scale and we would be mad to turn our backs on a mechanism for collaboration that we have painstakingly built up over 25 years or more, to return to a pre-collaborative mode in which we are doing it on our own.'

Minister for Science Jo Johnson also believes Brexit would be damaging for UK science on a whole: 'No-one doubts Britain could stay a science player outside of the EU. Indeed, some of our universities have been successful for longer than many of its member states have even existed. But the risks to valuable institutional partnerships, to flows of bright students and to a rich source of science funding mean the Leave campaign has serious questions to answer.' [3]