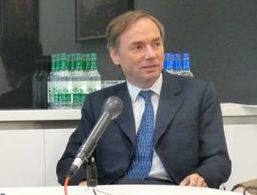 Sam Laidlaw is on the board of bank HSBC Holdings plc.

He is the former CEO of energy giant Centrica plc and the former lead non-executive board member of the UK Department for Transport.

Laidlaw is a qualified solicitor and has a Master's degree in Business Administration from INSEAD in France.[1]

He is also a former member of the UK Prime Minister’s Business Advisory Group.[1]

Laidlaw was appointed to board of HSBC in 2008, and is currently an independent non-executive director and chair of the group remuneration committee and nomination committee.[1]

Following a major reshuffle in March 2015, Laidlaw was appointed chair of the group remuneration committee and nomination committee. Laidlaw, who received up to £5 million a year at Centrica, has previously been criticised for his lavish windfalls, will now be put in charge of setting pay levels at the bank and will receive a wage increase from £120,000 to £155,000 a year. The appointment has been criticised as reinforcing the 'cosy club' of executives who set rewards packages for each other.[2]