Sabin Inayat Khan (born circa 1975, previously known as Sabine Khan, Sabin Inayat, Sabin Malik and Sabin Malik Khan), is a British civil servant who was deputy director of the Research Information and Communications Unit, a strategic communication operation which is part of the Office for Security and Counter-Terrorism (OSCT), a UK intelligence agency, based in the Home Office. in 2019 Khan joined RUSI 'on a secondment from the Home Office working to advance global policy and analysis'[1] It is notable that in the biographical sketch on the RUCI webiste, presumably drafted by Sabin herself, there is no mention of either RICU or of communications activities.

Sabin Khan was born to Choudhry Inayat Khan (born September 1942) and Shahida Inayat (born April 1955) and was brought up in Bradford one of seven siblings including her younger sister Sara Khan (b 4 January 1980). Information on the Electoral roll suggests that she was registered to vote in Bradford as Sabine Khan. Along with Sabin's elder brother Anis Khan (born February 1976), her parents are directors of a nursing home in Bradford [2][3]

She would later work closely with her sister Sara Khan through their mutual involvement with Inspire. Her younger brother Adeeb Khan, (who is a director of a brand management company in Bradford[4]) also helped with the Inspire project by registering the domain name wewillinspire.com, in late 2008.

In 2000 Sabine Khan, as she was then known, married Zubair Malik a teacher with whom she lived in Hounslow and then Feltham in London. During this period until around 2008 Khan used the name Sabin Malik. After the marriage broke up she reverted to her family name, though for a time in 2009 she was referred to as Sabin Malik Khan, for example on the Sisters Against Violent Extremism website which referred to her appointment at the OSCT in the Home Office.[5]

In and around 1996 using the name Sabin Inayat, Khan worked for a magazine called Trends under the editorship of Inayat Bunglawala. This was a publication created in around 1989 associated with and distributed by the Ilford branch of Young Muslims UK, an organisation affiliated with the Muslim Council of Britain. In late 1996 Khan was referred to as one of three 'consulting editors' and wrote the first of a series of articles on the 'Islamic revival', a profile of Mawlana Sayyid Abul A'la Mawdudi.[6]

I launched one of the largest community-led, UK government-funded Preventing Violent Extremism projects in West London. The MPower Youth Project - part of the government's Prevent agenda - identifies and engages disaffected Muslim youth from South Asian and Somali backgrounds who may be vulnerable to radicalisation and we support them with police input and community help. This multi-agency, community-based approach is unique in Europe and the Office of Security and Counter Terrorism has trained me to deliver workshops to raise awareness of radicalisation issues in communities. Nationally, I liaise with government partners in OSCT and the Home Office. I also act, to date, as consultant to counter-radicalisation projects in the UK and abroad.

Leading on budgeting and tailoring output to suit local, national and international priorities, my role was what I made it - with some considerable success. MPower became a model for other counter-radicalisation projects in Europe and our work supporting vulnerable young people in communities and schools is still being showcased in UK and abroad.[7]

MacPherson went on to work at the European Strategic Communications Network while Sabin Khan was deputy director at RICU.

Khan was appointed to the Women's National Commission in 2006.

In January 2008 Khan (then known as Malik) was appointed to the National Muslim Women's Advisory Group (NMWAG) which 'was formally launched … by the Prime Minister'.

NMWAG will be led by 19 Muslim women representing a wide spectrum of communities, professions and traditions. They will discuss issues and concerns that affect Muslim women, for example education, employment, access for women to mosques and their management committees and cultural barriers including issues around forced marriages.[8]

The NMWAG groups was subsequently slightly expanded and one of the new members was Inspire's Kalsoom Bashir.

Sabin Khan (then known as Sabin Malik) took part in a British propaganda trip to Ethiopia in August 2008.

Four prominent British Muslims visited Ethiopia and Hargeisa in Somaliland from 18-23 August as part of a Projecting British Islam visit. The main aim of the visit was to build stronger partnerships between British Muslims and the Ethiopian and Somali Muslim leadership. The delegation helped showcase the integral role of British Muslims in the UK and highlighted the work being undertaken in both countries by British organisations. An important outcome of the visit was to add the voice of British Muslims to those in Ethiopia and Somalia who are opposed to extremist ideology.
The delegates met students, civil society and religious leaders in both Ethiopia and Hargeisa. A highlight of the visit was when Sheikh Babikir Ahmed Babikir, one of the delegates, addressed 10,000 people during Friday prayers at the main Mosque in Ethiopia. Other highlights included meeting the President of Somaliland and taking part in two lively Q&A sessions about Islam with young Somali and Ethiopian Muslims.[9]

According to the press release:

Projecting British Muslims is a programme of visits by British Muslim delegations facilitated by the Foreign and Commonwealth Office to a range of Muslim majority countries, and countries with Muslim communities. [9]

The FCO is careful to note:

3. Members of the Delegation are not spokespeople for the Government.
They represent the UK and their communities. They are free to express their own opinions during the visits. The FCO and our Embassies arrange programmes that enable the delegates to engage with a wide range of opinion-formers or young people in the country they are visiting e.g. university students; community leaders, civil society groups. The groups they represent are not in any way affiliated with the British Government. Participants all freely volunteer their time. [9]

In November 2008 Khan spoke at a Quilliam Foundation meeting. According to the account of Alan Craig, who at that stage was a Christian Peoples Alliance councillor in London (he joined UKIP in 2014 and stood as a UKIP candidate in the 2015 General Election):

Then on Monday I attended a lunchtime round-table discussion at the Quilliam Foundation, the organisation recently launched by two former Hizb-ut-Tahrir militants (Ed Husain and Maajid Nawaz) to counter the very Islamic extremism that they themselves once espoused. The theme of the seminar was British Muslims in 2009 – Where Next?
One of the speakers was Sabin Malik, a hijab-wearing young Muslim involved in community work and local government, and an adviser to Hazel Blears MP, the Minister for Community and Local Government. Sabin’s enthusiasm for things British was, again, unexpected, and certainly not the sort of sentiment you would hear from your average guilt-ridden self-loathing left-liberal opinion-former that stalks the corridors of Westminster, Whitehall and White City.
Britain is a great nation, she said. She rates the country’s openness, tolerance and democracy and in her view there is no better place for a modern Muslim woman to live. Her enthusiasm for things English like fish and chips, an ‘Indian’ (curry take-away) and the proverbial cup of tea reminded me of John Major and his description of a Britain at ease with itself – “long shadows on cricket grounds, warm beer, dog lovers, pools-fillers and old maids bicycling to Holy Communion through the morning mist”.
It comes to something, I reflected, when it’s people from ethnic-minority backgrounds who show the rest of us how to have confidence in what it is to be British. In modern multi-cultural Britain I thought it was only the excellent Royal British Legion who displayed such flag-waving patriotism and sincere national gratitude in public. It seems I was wrong.
Our minority-background population to show us the way? It appears that they at least know no identity crisis.[10]

In January 2009 Khan spoke at the launch conference of Inspire, an organisation led by her sister Sara Khan, which claims to be a grassroots, independent and women's rights organisation. [11]

In February 2009 Khan took part in a further British propaganda trip as part of the Projecting British Islam project of the Foreign and Commonwealth Office. 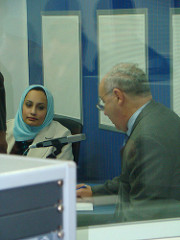 Sabin Malik in Algeria as part of an FCO sponsored trip, 7 February 2009. The original caption on the FCO Flickr feed was: 'Sabin Malik is interviewed by Radio Qu'ran in Algeria. She discussed the role of women and muslims in the UK.'

Khan joined the OSCT in April 2009, working in propaganda with the Research Information and Communications Unit.

Khan played a role in the internal discussion on the exclusion of the Muslim preacher Zakir Naik.

In a letter highlighting the reasons for his exclusion, May quoted Naik's assertion that "all Muslims should be terrorists" as one example of his unreasonable behaviour. He claims the statement was taken out of context and that he was referring about the right to "terrorise" thieves. Naik, who has also been accused of holding antisemitic and sexist views, claims to be "non-violent and an enemy of extremism".
His ban provoked a row in Whitehall over whether it was right to exclude Islamic preachers who pledged to help the government halt the spread of violent ideologies. In October, court papers revealed that Charles Farr, director general of the office for security and counter-terrorism, backed Naik's fight to stay in Britain. One of Farr's senior officials, Sabin Khan, was suspended from duty for criticising the exclusion as a "huge error of judgment".[12]