Dale Gribble, the paranoid character from King of the Hill who uses the pseudonym 'Rusty Shackleford'

Dr. Rusty Shackleford is a pseudonym used by a right-wing Islamophobic blogger, most notable for running the Jawa Report. In June 2009 he testified against the British Muslim Ishaq Kanmi, who was charged in relation to postings made on the US website Infovlad in May 2007. [1]

The pseudonym ‘Rusty Shackleford’ is derived from the American cartoon comedy King of the Hill, where it is used by the character Dale Gribble. In the show Gribble is a right-wing libertarian, a conspiracy theorist and a gun enthusiast. His use of an alias reflects his paranoia and his suspicion of the US Federal Government. The blogger ‘Dr. Rusty Shackleford’ states on his blogger.com profile that he is based in Arlen, Texas – the fictional town where King of the Hill is set. [2] 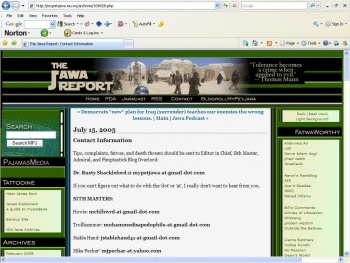 ‘Rusty Shackleford’ has been registered with blogger.com since February 2003. As of 24 July 2009 he has maintained 20 blogs, although most only include a handful of postings. [3] His earliest blog http://mypetjawa.blogspot.com was first used on 1 January 2004. It is now maintained as a backup blog for the Jawa Report’s main website http://mypetjawa.mu.nu/.

The name of the Jawa Report draws on the mythical world of Star Wars, which has a particular cultural resonance in the US, particularly online. In the world of Star Wars, Jawas are nomadic desert dwelling scavengers who, along with the more aggressive Tusken Raiders are in the context of the blog meant to represent Arabs and Muslims. [4] This implicit racism is more explicit in other early postings explaining its purpose. In one ‘Rusty Shackleford’ openly stated that he regards political violence in the Middle East to be rooting in Islam, stating: ‘The root cause of Islamism is Islam. Not poverty. Not oppression. Not Zionism. Islam.’ [5] In the same post he argues that:

In a real war, against real enemies, we need some good old fashioned, sweet down-home, funny, bigotted [sic.] propoganda…So, poke fun at Islam. Make fun of Muhammed. Paint our enemies in the worst light possible. Tell jokes about them. Create art that ridicules them. Sing songs not suitable for prime-time. Offend people that need offending. [6]

In October 2007 the Washington Times published an article on what it called, 'Ordinary Americans...tracking down U.S. Web sites used by al Qaeda and jihadi sympathizers and then using the Internet to persuade the service providers to snuff out the sites.' 'Rusty Shackleford' was interviewed for the story and claimed to have 'destroyed 30 Web sites'. Asked why he does what he does, 'Shackleford' told the paper: "Because my wife won't let me go shoot them." According to the story, having taken down a website, 'Shackleford' and other hackers replaced the site with a 'screen shot of a blue AK-47 rifle — the symbol used by some bloggers to indicate "pwning" or owning a site.' [7]

Involvement in case against Ishaq Kanmi

According to a report in the Lancashire Telegraph, ‘Rusty Shackleford’ was a moderator of the now defunct website InfoVlad (www.clearinghouse.infovlad.net), and contacted the Metropolitan Police when a user named Sheikh made a posting in May 2007. The user’s IP address was then traced to Ishaq Kanmi. [8]

‘Rusty Shackleford’ gave evidence under his pseudonym after an order was granted protecting his anonymity. He reportedly told the Court: “Another moderator deleted the post, but I saved it and gave it to the police. I called someone at the Metropolitan Police and emailed to someone working in the counter-terrorism unit.” According the Lancashire Telegraph he added that, after reading a BBC report that a Briton had announced he was the UK al Qaida leader, he emailed the former Infovlad user to ask if he was the same person. [9]