Professor Robin Lovell-Badge is Head of the Division of Stem Cell Biology and Developmental Genetics at the MRC National Institute for Medical Research in London[1] and sits on the Advisory Committee of the Science Media Centre[2]. 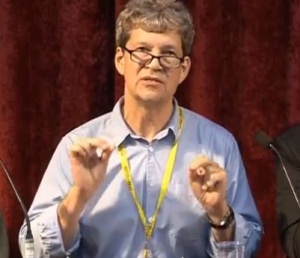 Robin Lovell-Badge during his participation in the 2012 Battle of Ideas conference session - 'Banning the Brave New World? The ethics of science'

Robin Lovell-Badge obtained his PhD in Embryology at University College London in 1978, before undertaking postdoctoral research in Cambridge and Paris.[3]

In 1982 Lovell-Badge established his independent laboratory at the Mammalian Development Unit of the Medical Research Council at University College London. In 1988 he moved to the National Institute for Medical Research, becoming Head of Stem Cell Biology and Developmental Genetics in 1993.[3]

Lovell-Badge is Honorary Professor at University College London's Department of Anatomy and Developmental Biology and a Distinguished Visiting Professor at the University of Hong Kong.[3]

Lovell-Badge serves on the Scientific and Clinical Advances Advisory Committee of the Human Fertilisation and Embryology Authority.[3] He is also on the Council of the Academy of Medical Sciences.[3]

In 2010, Lovell-Badge was quoted by the BBC in an article focusing on concerns by stem cell experts that a small group of scientists were apparently 'vetoing high quality science from publication in journals':

It's turning things into a clique where only papers that satisfy this select group of a few reviewers who think of themselves as very important people in the field is published.

You can get a lot of hype over a paper published on stem cell research that's actually a minimal advance in knowledge whereas the poor person that is doing beautiful research that is not catching the eye of the editor, you don't get to hear about that, even though it could be the world changing piece of research.[4]

Writing in BioNews in 2012 as part of a critique of research carried out at Harvard University by stem cell scientist Professor Jonathan Tilly - whose 'dramatic' findings, according to Lovell-Badge, lacked 'robust evidence and carefully drawn conclusions', he noted:

'Scientists have to be optimistic. How else to survive months or years of frustratingly slow progress in a difficult and often poorly rewarded profession?

But despite the frustrations, scientists retain a responsibility to present their work in a balanced way and not to give unrealistic or false hopes. Unfortunately, several stem cell researchers seem to disregard this all too frequently and the field is particularly prone to hype. It's a risky business – overhyping treatments that turn out not to work out in the clinic leaves patients disappointed and erodes trust in all stem cell research.

It is possible to be enthusiastic about a piece of science, but to do so in a qualified manner that respects the hopes and fears of patients. Hype should be avoided for everyone's sake.’[5]

Lovell-Badge has been on the Board (now 'Advisory Committee') of the Science Media Centre since 2007.[6]

In 2004, Lovell-Badge was involved in a public dispute with the former Chief Executive of the Medical Research Council, (MRC) Colin Blakemore over plans to relocate the National Institute for Medical Research (NIMR) from its Mill Hill location. At a hearing before the House of Commons Science and Technology Committee, it emerged that NIMR scientists Lovell-Badge and Steve Gamblin had refused to put their names to a letter of the Task Force dealing with the potential relocation, because the draft letter stated that the Task Force had worked "without coercion". Lovell-Badge stated that he was 'was threatened with losing my job in late night phone calls' by Colin Blakemore:

I had telephone calls late at night from Colin Blakemore threatening my job. There were two occasions in particular last spring. He made statements such as 'Robin, I don't know how you could disagree with me - I am your employer.

Blakemore said after the hearing 'I deny that completely. There is absolutely no question of me threatening his job'.[7]

Submission from Fiona Fox of the Science Media Centre

In written evidence submitted, apparently 'reluctantly', to the Select Committee on Science and Technology, the Chief Executive of the Science Media Centre Fiona Fox wrote:

Robin Lovell-Badge and Colin Blakemore are shining examples of that rare gift to science media-relations—brilliant scientists who see the importance of engaging the media. As such they are both valued friends of the Science Media Centre and we take no position on the institutional issues involved in this dispute.
...
There was a long-standing open invitation from our friend Robin Lovell Badge to visit him and colleagues in Mill Hill. in Summer 2002 Robin called with proposing a specific time and date. The invite came at a time where there had been some media coverage of the row about NIMR and of course it crossed my mind that this would be raised. However, my main interest was to strengthen good relations with Robin, meet more good scientists and find out more about the science going on at Mill Hill so I went along.
...
I gave bits and pieces of advice—which is of course what I do—but did say that the SMC was good friends with the MRC press office and I didn't feel I could in any way become an adviser on this issue—which after all was an institutional story not a science story.
...
I feel I must explain the reference to the demonstrations outside the MRC. Robin Lovell-Badge definitely did not ask that question—he is more media savvy. But one of the scientists in the room did very tentatively ask whether I thought there would be any media interest in the entire staff of NIMR donning their white coats and protesting outside an MRC meeting. This was the most memorable bit of the meeting for me—(at that time relatively new to the strange world of science media relations)—and unfortunately I have obviously repeated it to someone—but only because it's such a beautiful example of the naivety of the scientific community about their own ability to generate media coverage. After seven years doing press work for a campaigning NGO which constantly had people dressed up outside World Bank meetings etc—it was quite touching to hear a scientist just starting to think in a similar way. I remember laughing loudly and assuring him that the sheer novelty of 500 scientists protesting about anything would guarantee media interest—but it was clear that there was no general enthusiasm for the idea!!![8]

Lovell-Badge was elected a Member of the European Molecular Biology Organization in 1993. In 1999 he became a Fellow of the Academy of Medical Sciences, and in 2001 a Fellow of the Royal Society.[3]

He is President of the Institute of Animal Technology.[3]

Lovell-Badge is on the Council of Understanding Animal Research.[10]

Lovell-Badge sits on the Steering Committee of The Hinxton Group[11], a project originating from the Stem Cell Policy and Ethics Program (SCOPE) at The Johns Hopkins Berman Institute of Bioethics which describes itself as 'an informal collection of individuals interested in ethical and well-regulated science'.[12]

Lovell-Badge is on the Board of the 'British side' of the Feldberg Foundation,[13] an organisation which '[promotes] scientific contact between German and English scientists within the sphere of experimental medical research, in particular in physiology, pharmacology and related topics'.[14]

Lovell-Badge is on the Board of Directors of the Public Library of Science (PLOS)[15].

Lovell-Badge is a contributor to 'Europe's stem cell hub', EuroStemCell.[16] The organisation ‘unites more than 90 European stem cell and regenerative medicine research labs in a coordinated effort to engage with the public about our science’.[17]

Lovell-Badge is on the Advisory council of Sense About Science.[18]