Canadian-owned exploration company Rathlin Energy UK first carried out tests on shale rocks beneath the East Riding of Yorkshire in 2014 to help determine whether the formation could be hydraulically fractured - the technical name for fracking.

In November 2018 it emerged that Rathlin UK owes nearly £34m to its 'ultimate' parent company in Canada according to its annual accounts. Its auditors, KPMG, warned that the debts “constitute a material uncertainty that may cast significant doubt on the Company’s ability to continue as a going concern”. The report noted that there was "uncertainty as to the ultimate parent’s ability to continue to finance the company’s operations” and that Rathlin was "dependent on these loans not being recalled".[1]

In June 2019 Reabold issued a statement to investors claiming that preliminary tests indicated that the West Newton site could be the UK’s largest onshore gas field and the largest onshore hydrocarbon discovery since 1973. According to Drill or Drop, the share pricesfor Reabold was up 24% at 1.025p, and also for project partner Union Jack ( up 26.47% at 0.215p).[2]

In summer 2008, Britain's DECC awarded Rathlin Energy (UK) Limited [Rathlin] a single exploration licence (PEDL 183) to search for oil and natural gas in East Yorkshire, north of the Humber from west of Beverley to the North Sea in the east. The licence area is 241,000 acres. Rathlin holds a 100 per cent working interest in the licence and originally had no partners. [3]

In November 2018 a £3million stake in PEDL183 was announced by an investment company, Reabold Resources in exchange for a 37.08% equity interest in the firm. The deal hinges on a farm-in agreement with two new partners Union Jack Oil plc and Humber Oil Ltd, which would give each firm a 16.665% stake each in PEDL183. That deal will result in Rathlin retaining a 66.67% equity interest in the asset. [4]

In March 2014, Rathlin Energy was seeking environmental permits to carry out a series of tests on two wells at Crawberry Hill and West Newton, near Hull. The plans include so-called 'mini fall-off tests' in the Bowland shale rocks, which stretch across the north of England.

Rathlin stated that it had no plans to frack at either of the wells and was merely 'assessing the rock’s potential'. It said its main aims were to test two 'conventional' reservoirs– ones that would not require fracking – but that it was 'prudent' to test the shale as well. According to The Telegraph:

Rathlin said the mini fall-off test would involve pumping up to 10,000 litres of water and potassium chloride into the shale rocks at pressure, “up to the point where the rock begins to be fractured”, to test how it permeates into the rocks.

A 'mini fall-off test' is also referred to by industry as a 'mini-frac', leading to accusations from the environmental group Greenpeace that Rathlin is 'seeking permission to carry out a fracking test” and 'using its conventional wells as a Trojan horse to creep into this area, without stirring up local opposition'. [5]

The firm had first began drilling in a field off Walkington Heads in Crawberry Hill in Walkington Heads, near Bishop Burton in February 2012 to look for oil and gas deposits and then began to explore the site at the village of Fosham, near Aldbrough in Holderness. It said an application for environmental permits at a site near Skirlaugh relates to drilling that has already taken place, 'allaying concerns that a third site is being explored'. [6]

The Freedom of Information Act also provides a specific exemption, under section 31, for disclosures that might “prejudice the prevention or detection of crime”. Thus, when Rathlin Energy insisted in 2014 that it had been “asked by the police to deviate from the Traffic Management Plan” for its site at Crawberry Hill “because of protester activity”, Humberside Police refused to tell us what this meant because it was “tactically sensitive” and therefore exempt. [7]

Rathlin announced in August 2015 it would abandon its exploratory well at Crawberry Hill on technical and commercial grounds.[8] Restoration of the site was completed by April 2016. 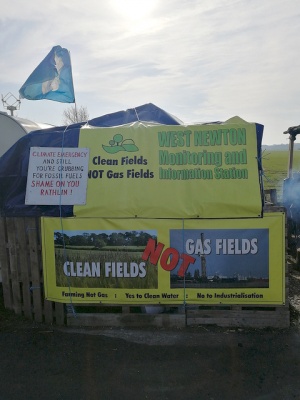 In September 2014 locals complained about noxious smells coming from Rathlin's exploratory oil and gas well at West Newton. The Environment Agency ordered the firm to rectify the situation[9] and reportedly recorded at least 14 breaches by Rathlin.

In late 2015 East Yorkshire councillors voted to extend Rathlin's permission to operate the West Newton A exploratory site for another three years but added a specific no-fracking clause.

In November 2018, Rathlin applied once again to extend the West Newton A oil and gas site operation for three more years. According to Drill or Drop's coverage of the council hearing on the application, "planning officers have recommended approval of the application with a no-fracking condition. But there have been more than 100 objections, including two nearby parish councils". The three-year extension was narrowly approved by a six-five vote on 15 November.[10]

West Newton-A-2 well was spudded on 26 April 2019 and reached its total depth of 2061m on 9 June 2019. According to company statements, Rathlin 'extracted a 28m of core from the Kirkham Abbey formation' (the well's main target) and all planned logging operations have been successfully completed.

Serious concern around Rathlin's operations and over the inability of the Environment Agency to effectively monitor the site led to local residents setting up the 'West Newton Monitoring and Information Station' on the grass verge outside the well site in January 2019, the same month that Rathlin drilled the conductor pipe for a second oil and gas well at the West Newton site.

DrillorDrop reported that East Riding of Yorkshire Council rejected the group's appeal against an eviction order in February and the group voluntarily moved further from the site, not wanting to waste taxpayer money on their eviction. [11]

Following 'encouraging' data, Rathlin said it planned to carry out more tests at West Newton in 2016, and in August 2016 was granted two permits by the Environment Agency for the new oil and gas exploration West Newton B site. It was expected to begin site construction work there in early 2018[12] but as of November, no work had been done. Rathlin's website as of June 2019 says 'this will be a conventional oil and gas appraisal well site targeting the Permian carbonate reservoirs.'