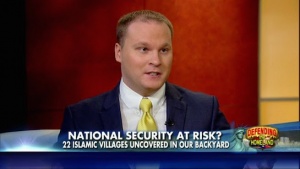 Rabbi Raphael Shore is a Canadian-Israeli filmmaker and the founder of the The Clarion Fund, a front for the ultra-Zionist Aish HaTorah, which has ties to the Israeli settler movement.[1] Shore is the twin brother of Rabbi Ephraim Shore, the former President of the Israel lobby media watchdog HonestReporting (also run by Aish HaTorah). His elder brother David Shore, a television writer and producer. Shore's films are produced and promoted by Honest Reporting.

Shore's controversial documentary about Islam in America Obsession became the centre of controversy when during the 2008 presidential campaign his organization had 28 million copies distributed to voters in swing states in an apparent attempt to play on fears about Obama's alleged Islamic roots.[2][1] Shore has frequently criticized US media for its supposed anti-Israel bias.[3]

Shore has written and produced the following films.