Police Scotland, established on 1 April 2013, is a police force responsible for the whole of Scotland. It is the second largest police force in the UK after the Metropolitan Police.[1]

In 2018 an investigation by Spinwatch into the policing of the anti-fracking movement found that 'despite the Home Office’s December 2016 advice that ‘support for anti-fracking is not an indicator of vulnerability’ under the Prevent strategy, 'at least seven of the 11 regional counter terrorism units (CTUs) and counter terrorism intelligence units (CTIUs) that make up the UK’s National Counter Terrorism Policing Network have either carried out monitoring or surveillance and/or unjustifiably smeared anti-fracking campaigners [over the past five years]. Scotland’s Counter Terrorism Intelligence Unit (SCTIU), led by Police Scotland, was one of those units. 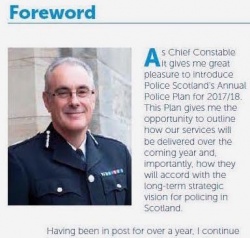 In his foreword for Police Scotland’s Annual Police Plan for 2017/18, Gormley outlines how the Scottish policing ‘service will be delivered over the coming year’ in alignment with the ‘long-term’ strategic vision for policing in Scotland. On tackling counter terrorism and domestic extremism, Police Scotland anticipates that ‘In 2017/18 we will continue to pursue terrorists and those who sponsor them and explore all opportunities to disrupt and detect such activities…’

While the ‘terrorists’ referred to here are ISIL and Northern Ireland-related, the plan also labels anti-fracking protestors and hunt saboteurs as a ‘Domestic Extremism’ (DE) threat whose activities similarly require detection and disruption:

‘…in 2017/18, we will continue to closely monitor individuals and groups that are involved/suspected to be involved in the DE arena and explore all opportunities to disrupt and detect their activities’.

The plan also makes clear its intent to gather intelligence from local communities, despite strong public opposition to fracking in Scotland.

‘Seeking the support of communities to develop the national intelligence picture around terrorism, domestic extremism and potential protests around fracking, shale oil and gas extraction given the nature of our commercial business infrastructure located in the Grangemouth area’. [2]

The revelations by Spinwatch prompted a furious response from anti-fracking groups, who called on the justice committee at the Scottish Parliament to ask Police Scotland to change its approach reported The Ferrett. [3]

“Police Scotland does not consider any form of lawful and peaceful protest to constitute domestic extremism; however, we accept that from a presentational perspective a misinterpretation of this position may have been given from the way this small section of the annual police plan was worded and presented. No such reference is contained in the current Annual Police Plan for 2018/19.” [4]