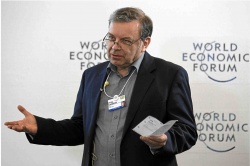 Philip Campbell, at the Global Agenda Council on Well-being & Mental Health, speaks during the session 'Maximizing the Power of Science' at the Annual Meeting 2013 of the World Economic Forum in Davos, Switzerland, January 25, 2013. This file is licensed under the Creative Commons Attribution-Share Alike 2.0 Generic license.

Campbell was educated at Shrewsbury School[1] and went on to study aeronautical engineering at the University of Bristol, graduating with a BSc degree in 1972.[4] He gained an MSc in astrophysics at Queen Mary, University of London[5] before doing his PhD in upper atmospheric physics at the University of Leicester.[6] His doctoral and postdoctoral research was on the physics of the ionized upper atmosphere and effects on radio propagation, using the latter as a probe of the lower ionosphere.[7]

<youtube size="medium" align="right" caption="Philip Campbell speaks on a panel on open access and editorial quality organised by the National Union of Journalists and the Wellcome Trust, 6 February 2013">uyeRAhxcPjQ</youtube>After a period of post-doctoral research in physics, Campbell joined Nature in 1979, becoming Physical Sciences editor in 1982. He left Nature in 1988 to be the founding editor of Physics World the magazine of the Institute of Physics.[8]

Campbell was appointed a member of an independent panel established in February 2010 by the University of East Anglia to investigate the controversy surrounding the publication of emails sent by staff at the university's Climatic Research Unit (CRU). Due to publicity about a 2009 interview with Chinese State Radio[9] during which he expressed support for the CRU scientists, he resigned just hours after the panel was launched.[10]