Peter R. Neumann (born 1974) is a German-born radio journalist turned academic who frequently appears on radio and television as an expert on terrorism and political violence. He is Director of the International Centre for the Study of Radicalisation and Political Violence at King’s College London where he is a senior lecturer in War Studies.

Before becoming an academic Neumann worked in Germany as a radio journalist. According to his biography he 'went to university in Berlin, Belfast and London. He received an MA in Political Science from the Free University of Berlin and a PhD in War Studies from King's College London.' [1]

His German language book on the IRA, IRA: Langer Weg zum Frieden (The Long Way to Peace) was published in 1999 and republished in 2002. In November 2003 Palgrave Macmillan published Neumann's second book Britain's Long War: British Strategy in the Northern Ireland Conflict 1969-98. As the title suggests, the book explored the strategy of the British Government in Northern Ireland from its intervention in 1969 to the Belfast Agreement in 1998. Publishing information on the book described Neumann as being a Research Fellow in International Conflict at Kingston University (although this may be an error). In 2003 he was granted an 'Early Career Fellowship' by the Leverhulme Trust for research entitled 'Going political: terrorism and electoral politics'. He was listed as 'Peter Neumann MSc PhD, Department of War Studies, King’s College London. [2]

In February 2004 History Today published an article by Neumann offering 'some useful lessons' from Northern Ireland which would ensure success for British forces in Iraq. His three lessons were: Lesson 1 - Don’t Fear Commitment, Lesson 2 - Don’t Ignore the Threat and Lesson 3 - Don’t Forget about Politics. In the article he argued that, 'Political leaders have to accept that there is stiff resistance to the occupation, and that a concerted campaign of counter-insurgency is necessary in order to re-establish law and order, even if this makes a swift end to the occupation impossible.' [3] Similarly in August 2005 he wrote an opinion piece for the International Herald Tribune offering three lessons in dealing with 'Al Qaeda and their associates' - namely 'be patient', 'be strong' and engage. [4]

According to his own CV, it was in 2004 that Neumann was appointed Academic Director of the International Summit on Democracy, Terrorism and Security a terrorism conference organised by the Club de Madrid (an organisation consisting of former government officials, academics, think-tankers and journalists). The conference was held in Madrid in March 2005 and was according to Neumann, the largest ever gathering of terrorism and security experts.

After the conference, the Club de Madrid set up a website in association with Open Democracy 'dedicated to continuing the Madrid dialogue'. [5] The website terrorism.openDemocracy was originally based at www.Madrid11.net. Its advisory board included Open Democracy's Chair and Vice-Chair, Kim Campbell Secretary General of the Club de Madrid and several other figures from think-tanks, the media and academia. Neumann was appointed a member of the advisory board as well as the website's editor. [6]

In March 2005 Neumann also acted as senior advisor to the National Policy Forum on Terrorism, Security and America's Purpose, which took place in Washington D.C in September 2005.

Neumann was director at the Centre for Defence Studies at King’s College London from 2005-7 and was then appointed as Director of the International Centre for the Study of Radicalisation and Political Violence (ICSR); a terrorism research institute based at King's College London. ICSR is a collaboration between King's College, the University of Pennsylvania in the United, the Interdisciplinary Center Herzliya in Israel and the Regional Center on Conflict Prevention in Jordan.

Boris Johnson on his bike 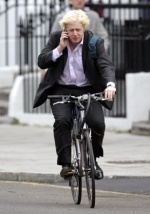 In June 2008 Neumann told the Islington Gazette that newly appointed London Mayor Boris Johnson should stop cycling to work because he was a potential terrorist target. Neumann was quoted as saying: "The risk he faces increased a lot when he became Mayor. What is particularly problematic is cycling. He is not in a car, so he has no protection. If someone wanted to do him harm it would be quite easy. Immediately on taking office he would have been advised on security...There is very little one can do to protect him on a bike. It makes him very vulnerable. I would strongly advise him not to ride into work." Johnson's office said he had been advised by the Police Commissioner that there was no security threat.[7]