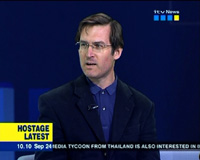 Paul Nicholas Eedle (born 25 September 1956) is a former Reuters reporter and co-founder of the independent television production company Out There News with John West. He is considered an expert on the Middle East region.

From Out There News[1]

Born in Nigeria, grew up in West Africa, went to school in Britain. Inspired by the illuminated books of William Blake (father of multimedia!). Studied Arabic and Islamic history at Cambridge Uni. Why? Arab oil states held the West to ransom in 1973 and nobody understood why. Travelled to Syria, Lebanon, Jordan, Egypt, Sudan and Yemen learning Arabic. Decided to become a journalist after visiting Lebanon during civil war.

Started Out There News with John West to create explorable multimedia documentaries - news as Myst. Site chosen as Yahoo Pick of the Year 1997. Developed seven further projects, including weekly audio show World from the Attic and children's site, Out There Reports. Built network of 40 correspondents in 30 countries but increasingly wanted to enable people to tell their own stories without journalists getting in the way.