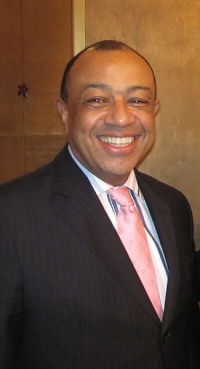 Lord Paul Boateng is a former Labour cabinet minister, and served as British High Commissioner in South Africa from 2005 to 2009.[1]

As High Commissioner, Boateng was involved in making representations to the South African government about its proposed legislation preventing South Africans from joining foreign military forces.[1]

He sat on the board of private military and security company Aegis Defence Services from October 2009[1] until 2012. His appointment was approved by ACOBA "subject to the conditions that, for six months from his last day in post, he should not return to South Africa for business purposes, give advice on it, or have dealings with companies there, and, for 12 months from that same date, he should not be personally involved in lobbying UK Ministers or Crown servants, including Special Advisers, on behalf of his new employer or the Private Military and Security sector as a whole."[2]

Remunerated interests as at February 2014: