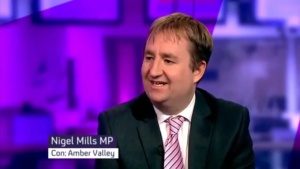 Nigel Mills has been the Conservative Party MP for Amber Valley since 2010.[1] In the 2015 general election Mills retained his seat with a majority of 4,205. [2]

Mills was the longstanding chair of the All Party Parliamentary Group on Unconventional Oil and Gas [3] until May 2017. The APPG was not re-formed after the June general election.[4]

'Shale gas is a great opportunity'

In 2014, Mills participated in the UK Shale Gas World Congress, a planning and strategy summit of oil and gas industrialists. In an interview with Shale World, he said:

'I think shale gas is a great opportunity to provide the UK with a domestic energy supply -this is especially important as production of gas in the North Sea declines. It is important for the UK to find a domestic energy source, as this will ease our dependence on unpredictable foreign sources of energy and enable us to have greater control of energy prices'.

'What we want is to see a lot of companies involved in the shale industry in the UK with good experience – as with those operating in the North Sea.'

'I would say that the industry is moving forward, yes. Cuadrilla has demonstrated, and continues to show that it is committed to maximising explorations and the Government has shown support for this. We need to move forward slowly and steadily, making sure the regulation works, the safety works and then hopefully in the near future we can see this industry making an impact on the UK’s energy security'. [5]

'I find that environmental campaigners tend to ignore the importance of gas here in the UK and in their homes – they continue to use gas to heat their homes whilst questioning the potential at this premature stage, without providing any sort of alternative. They also tend to ignore the environmental and economic benefits and the experts’ advice – that properly regulated shale production is safe.'

'What I would say to these people is, can we really afford to pass this up, especially when the experts consistently agree that, properly regulated, shale has real potential?' [6]

He served as chair of the All Party Parliamentary Group on Unconventional Oil and Gas from May 2015- June 2017.

Mill's constituency includes one oil and gas licence block, awarded to INEOS by the Oil and Gas Authority under the 14th licensing round in 2015. There are plans for one shale well and 2D and 3D seismic surveying, but no active applications were underway in November 2016. [7] In August 2015, INEOS announced plans to start test-drilling in this block in 2016 or 2017, with the possibility of 'early stages of producing commercial gas by the end of the decade'. [8] In May 2016, INEOS held an invitation-only meeting to town and parish council representatives for Amber Valley and Derbyshire. [9]

Mills has generally voted against increased regulation on fracking. [10]