The National Urban Training Center, known as Baladia City or MALI (its Hebrew acronym), is a military training centre located at the Tze’elim training base in southern Israel. It is used by the Israel Defence Forces to plan assaults on Gaza, the West Bank, Lebanon and Syria. The facility, which was built by the Army Corps of Engineers and funded largely from US military aid, is a 7.4-square-mile model city consisting of 1,100 basic modules that can be reconfigured by mission planners to represent specific towns. [1] The Marine Corps Times website reported in June 2007 that: 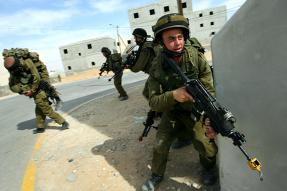 The author and journalist Matt Carr writes in Race & Class that the Centre is 'fitted out with explosive devices and snipers, and populated by Israeli military graduates of Arabic language and culture programmes posing as civilians and enemy fighters.' [3] The Jeruslam Post reported on an early training exercise in which '350 soldiers were spread out in the fake town, some playing the role of civilians while a few women, dressed in American uniforms and armed with laser target rifles, acted as Hizbullah fighters.' The paper noted that, 'Arab music was played in the background throughout the entire exercise, to get everyone in the mood'. [4]

Steven Blum of the US National Guard visited the Center in 2008 and said: 'I’d like to see Soldiers go through a facility like this somewhere before they deploy to counterinsurgency missions abroad. You get the advantage of the identical climate, the same geography, topography. ... It’s a first-rate place. It couldn’t be more realistic unless you let people actually live there.' [5]