It is formally defined as:[1]

Information management system used to host information and intelligence gathered in the course of counter-terrorism investigations.

Rather than being a single database, it was a software which ran on local police services to serve individual units, known as 'instances'. However, NSBIS appears to have incorporated connectivity between the different instances, particularly with one known as NSBIS-N (see below).

316.. NSBIS is designed to computerise the functions carried out by Special Branch Groups, Nationality (OVRO), Ports and Special Branch offices. The data is held in a single database with access rights limited only to specified groups of officers for specific reasons. One of these groups of officers was the [National Domestic Extremism and Disorder Intelligence Unit (NDEDIU)]. Intelligence related to domestic extremist activity, sourced from police forces, counter-terrorism units, industry and open sources, was shared through, organized and recorded on NSBIS.

NSBIS was distinct from other systems such as the Police National Computer and the Police National Database and could not be accessed through them.[1] This was so it could store classified and other protectively marked material, marked up to level of 'Secret', which other Metropolitan Police databases were unsuitable for storing.[3][4]

Individual Special Branch / Counter Terrorism units were able to customise aspects of it. This lead to 'inconsistent and varied information-recording practices', a weakness which lead to the development of its successor, the National Common Intelligence Application.[1]

Once the process of transferring to the NCIA has been done, the NSBIS databases will be marked as 'Legacy' databases. Due to their relevance to the Undercover Policing Inquiry, they will not be disposed of in line with normal police Review, Retention and Deletion policy. Any access / ownership will still go through the host organisations rather than the Inquiry.[5]

In the 2000s, NSBIS came under the aegis of the National Coordinator for Special Branch,[6], a role managed by the ACPO Terrorism & Allied Matters Committee.

NSBIS was originally a set of 'national standards for the management of intelligence by the individual special branches'.[7] In it's 2003 thematic inspection of Special Branch units, A Need to Know, the Inspectorate of Constabulary noted that Special Branch lacked adequate IT and that 'overall, a Special Branch national IT network would significantly enhance effectiveness, stating:[8]

However the inadequacy of current arrangements cannot be overstated and the development of a national IT strategy for Special Branch and Ports Policing is long overdue. ACPO (TAM) is actively developing IT systems to provide this national network and HMIC encourages all forces to work closely with them in aligning their long term procurement program.

HMIC went on to recommend in the same report:

... as a matter of priority the Home Office enables identified national Special Branch IT requirements to be implemented and most importantly funded, through a clear, robust, time-tabled strategy.

From this it appears that NSBIS is an information management strategy that turned into a computer system incorporating a database under the aegis of the Association of Chief Police Officer's [|Terrorism and Allied Matters Committee].

An earlier incarnation of the system was developed and deployed by private contractor Serco in the 1990s.[9][5]

NSBIS 2 was developed by a related company, Serco Project Engineering, with work starting as early 1999, and mentions of contracts running support services from 2002 to 2012[10][11][12] However, it appears that of September 2004 work in relation to it was ongoing.[13]

A number of individual forces have confirmed by 2011 they were using NSBIS software including Metropolitan Police,[12] Hampshire[14] and Avon & Somerset.[15]

It appears that UK Border Agency used it as well.[11]

There is a national installation referred to as NSBIS-N or 'National NSBIS', which[5][12]

NSBIS-N only became operational in April 2008, prior to which there was no national installation.[5] Once it became live, however:[18]

When forces input information onto their local NSBIS, this was automatically uploaded to NSBIS-N. While there was an option to prevent this from happening, basic details associated with an entry such as names, addresses and telephone numbers would still be uploaded to NSBIS-N.

This was alternatively noted as:[5]

1) Limited information providing a trace of each entry will appear on the NSBIS, provided the default option to do so has not been changed by a local force or unit; and
2) Individual forces or units chose to transfer information to another force or unit via secure email transfer, and that second force or unit takes the decision to upload it to their installation upon receipt.

NSBIS-N is under the control of the National Counter Terrorism Policing Headquarters.[5] NCTPHQ is a successor unit to the ACPO Terrorism and Allied Matters Committee, playing a national lead on counter terrorism and domestic extremism policing. SOURCES.

Curiously, the Metropolitan Police had search access to NSBIS-N, while neither NCTPOC or the Police Service of Northern Ireland had any access.[5]

It appears that some local Special Branch units migrated to the national NSBIS, for example, Gloucestershire and Devon & Cornwall forces, a 2012 document stating:[19]

SB in both Glos and D&C will migrate to the national SB intelligence system (NSBIS) during March 2013, ensuring all forces in the region utilise the same IT system and lay the foundation for regional secure IT connectivity. 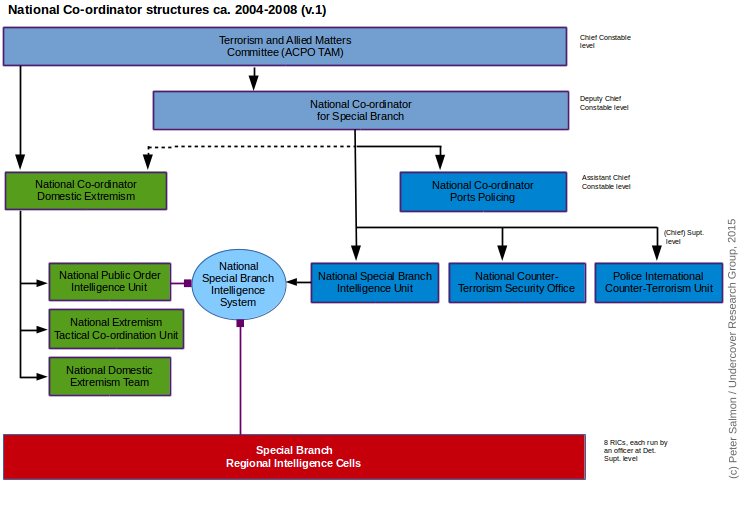 According to a statement of Michael Killeen, head of intelligence for CTPNOC:[21]

104. Information recorded on NSBIS is expected to comply with these requirements.

In late 2011, Counter Terorism Command (SO15), within the Metropolitan Police, adopted its own version of NSBIS, held within the Intelligence Management and Operation Support unit. There it interfaces with legacy systems used for the digitising of the indices for the old Special Branch Registry.[20]

This system contains all intelligence reports received into the London Intelligence Unit since December 2011 when NSBIS was adopted. When the system is interrogated to establish how many reports it contains the database is so large the document search fails - 4,000 reports were added in July 2014 and we've had the system since December 2011. In addition all the data from the preceding BRS is also stored in the database. Analysis of audit figures gives a best guess suggesting there are approximately 800,000 identifiable records. 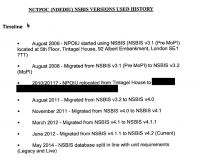 The history of the national domestic extremism units is convoluted one and is covered in a separate article. An early unit, the National Public Order Intelligence Unit, created an instance of NSBIS in August 2006.SOURCE: HMIC 2012 & 2013[21][23] This became what is generally referred to as the National Domestic Extremism Database.

When the national domestic extremism units passed to control of the Metropolitan Police in 2011, the database was continued, the controlling unit renamed National Domestic Extremism and Disorder Intelligence Unit (NDEDIU) and subsequent renamings / re-structurings.[21] [24]NDEDIU has since been submerged into CTPNOC,[20] though the function has remained.

In May 2014, NDEDIU (as it still was) initiated a new instance of NSBIS. This was because the list of records marked for review in light of HM Inspectorate of Constabulary investigations critical of the large volume of material being retained,[18] had become so large it caused the system to lock and ceased functioning properly. As a result a new database was started, and the 2006 database began being referred to as the Legacy database. [21][18]

For the 2014 database, the NDEDIU manually migrated over records over from the 2006 Legacy database. These records were chosen in light of relevant Metropolitan Police policies on information Review, Retention and Deletion (RRD). The Legacy database can still be accessed for certain purposes, including the Undercover Policing Inquiry.[21]

According to one report:[18]

On local installations of NSBIS, there was an option for forces to pass information uploaded directly to NDEDIU's installation of NSBIS, if they considered it relevant to the NDEDIU's role of assessing intelligence relating to domestic extremism.

Various references to a national Fairway database can be found.

In 2008, Fairway was a Joint Terrorism Analysis Centre project which:[25]

produces a variety of reports tailored to meet the needs of individual customer departments. These are sanitised intelligence reports that are disseminated to a wide range of Police customers via Special Branches. They are predominantly intended for use as background briefing documents among officers and staff engaged in operations duties, in order to heighten awareness of the current international terrorist threat.1012

Fairway has been referred to as 'the umbrella title given to various work streams which feed into an intelligence database designed to counter terrorism in its earliest stages of planning', and:[26]

The programme asks police officers and security personnel to be aware of the constant threat of terrorism and feed any gathered intelligence, including any concerns regarding individuals behaviour, to their local Special Branch for inclusion on to the National Fairway database.

The Fairway database was also used to record details of journalists and photographers, linking it to the National Domestic Extremism Database.[27] Given the national remit of Fairway, it would appear the database it fed into is likely the National NSBIS above.