Morton I. Abramowitz is an important figure in the United States' foreign policy elite and has been a key player in determining recent U.S. foreign policy. He is on the board of several important organizations affecting US policy, such as the National Endowment for Democracy (NED). 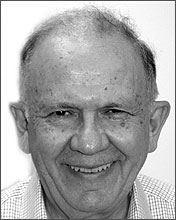 He joined the Foreign Service in 1960 after attending Stanford and Harvard, and serving in the United States Army. Prior to joining the Carnegie Endowment in August 1991, he was Ambassador to Turkey. He has also served as Assistant Secretary of State for Intelligence and Research, United States Ambassador to the Mutual and Balanced Force Reduction Negotiations in Vienna, Ambassador to Thailand, Deputy Assistant Secretary of Defense for Inter-American, East Asian and Pacific Affairs, Special Assistant to the Secretary of Defense, and Special Assistant to the Deputy Secretary of State. He also served in Hawaii as political advisor to the Commander-in-Chief, Pacific. He has the permanent title of career ambassador.

He is the author (with Richard Moorsteen) of Remaking China Policy, 1972; Moving the Glacier: The Two Koreas and the Powers, 1972; East Asian Actors and Issues, 1991; and China: Can We Have a Policy?, 1997. He was the editor and part author in 2000 of a book of essays: Turkey's Transformation and American Policy. His most recent book with Stephen Bosworth is Chasing The Sun: Rethinking East Asian Policy. Since 1992, he has published numerous articles and essays on subjects ranging from American foreign policy to issues in the former Yugoslavia. They have been published in the New York Times, the Washington Post, Newsweek, Time, International Herald Tribune, Christian Science Monitor, Wall Street Journal, Foreign Policy, Foreign Affairs and many others.

He is the recipient of numerous awards, including the Joseph C. Wilson Award for International Service from the University of Rochester in 1980, and the President's Award for Distinguished Federal Service in 1981, 1985, and 1988. He also was awarded the National Intelligence Medal in 1989, the Director General's Cup of the Foreign Service in 1995, and the Award For Lifetime Contributions to American Diplomacy of the American Foreign Service Association. He serves on the board of many non profit organizations, including the International Rescue Committee, the National Endowment for Democracy and the International Crisis Group.[1]

Diana Johnstone, in her book, Fools Crusade: Yugoslavia, NATO and Western Delusions, states that Abramowitz played a role in defining US foreign policy after the collapse of the Soviet Union:

Presidents come and go but the continuity of U.S. policy is ensured by a small elite of policy-makers who remain outside party politics – and often outside public view. An influential member of this foreign policy establishment is Morton Abramowitz, whose career has involved him with both the Afghan mujahidin and Kosovo Albanian rebels. In 1986, as assistant secretary of state for intelligence and research in the Reagan administration, Abramowitz helped arrange delivery of the Stinger missiles. The collapse of the Soviet Union obliged U.S. policy-makers to redefine the "threat" justifying foreign intervention. The "war on terrorism", launched by President Reagan in the early 1980s, was suffering by the end of the decade from a dearth of active terrorists. As president of the Carnegie Endowment for International Peace in the early 1990s, Abramowitz headed a project to develop a new U.S. foreign policy for the post-Cold War era. Rather than simply identifying "threats", especially at a time when few threats could be seen, a successful new policy needed to combine promotion of U.S. interests with proclamation of American "ideals".[2]

Abramowitz acted as an "advisor" to the Kosovar rebels during the Kosovo conflict. Diana Johnstone comments as follows on this relationship, as well as his relationship with the then US secretary of state Madeleine K. Albright:

Abramowitz continued to act from behind the scenes as an eminence grise for Albright. He helped found the high-level International Crisis Group, a chief policy designer for Bosnia and Kosovo. He was omnipresent behind the scenes of the Kosovo drama, both in making policy and in shaping elite business, government, and media opinion. He acted as an advisor to the Kosovo Albanian delegation at the Rambouillet talks, whose programmed breakdown provided the pretext for the NATO bombing.
The same group of advisors that theorized military intervention for "humanitarian" reasons went on to make it happen.[3]

From 1991 until 1997 Abramowitz led a group to find a means to recast US intervention around the globe. The writer and television producer John B. Roberts II, writing in The American Spectator, states that Abramowitz, during his tenure as president of the Carnegie Endowment between 1991 and 1997, "established blue-ribbon commissions of policy experts to create a new U.S. foreign policy framework". Roberts says that the group of experts in the spring and summer of 1992 included Madeleine Albright, Henry Cisneros, John Deutch, Richard Holbrooke, Alice Rivlin, David Gergen, Admiral William Crowe, and "numerous lesser luminaries who would later "get sub-cabinet appointments" in the Clinton administration. These experts, Roberts says, "debated defense and foreign policy for hours". Roberts adds: "Richard Perle and James Schlesinger were the token conservatives".[4]

During one of these sessions, Roberts writes, the debate turned to the Balkans and the war that had erupted in Sarajevo. He notes, "Richard Holbrooke, who three years later became Clinton's architect of the Dayton peace accords, argued passionately for American military intervention there."[5]

According to Roberts, the Carnegie Endowment came up with a solution to the conflict:

By mid-summer, the Carnegie Endowment's final report was ready. "Changing Our Ways: America's Role in the New World" was a dramatic departure from the bipartisan foreign policy consensus of the Cold War period. Richard Perle and James Schlesinger resigned rather than endorse the report's conclusions.

The report urged "a new principle of international relations: the destruction or displacement of groups of people within states can justify international intervention." It said the U.S. should "realign NATO and OSCE [Organization for Security and Cooperation in Europe] to deal with new security problems in Europe" and urged military intervention under humanitarian guises.[6]