'Michael Scott is the cover name used by a former Special Demonstration Squad undercover officer who infiltrated the Young Liberals, Anti-Apartheid Movement and Workers Revolutionary Party from 1971 to 1976.[1]

They are also referred to by the cipher HN298 (for the N cipher system see N officers).

In the course of his deployment, he was arrested at a demonstration against the British Lions rugby tour to South Africa on 12 May 1972 for obstruction of the highway and assault of a police officer. He was prosecuted in summary proceedings in his cover name. He was convicted of both offenses and fined and made the subject of a conditional discharge. His actions were approved by his line management. Not long after his deployment, he left the police service, since when he has had nothing to do with the police.

No application was made over the cover name. An application made by the Metropolitan Police to restrict the real name, on ground that releasing it would interfere with HN298's Article 8 rights,[3] though without HN298 having made his position clear - having politely declined to cooperate with the MPS risk assessor via email. The Inquiry Chair, John Mitting, wrote in November 2017:[2]

It is possible that, if his cover name is published, members of the groups against whom he was deployed will remember him and be able to give evidence about him. For that to happen, it is not necessary that his real name should be published. He has politely declined to cooperate with the Metropolitan Police risk assessor. In consequence, the Inquiry does not know whether he wishes to protect his real name. If he were to do so, and no new information adverse to him were to emerge, the interference with right to respect for his private life under Article 8(2) of the European Convention which would be occasioned by publication of his real name would not be justified. For the time being, on the application of the Metropolitan Police Service, his real name should not be published. This decision will be reviewed when he has made his own position clear.

In May 2018 Mitting accepts the MPS application to restrict real name and rules it should be witheld, saying: 'I reject the suggestion that applications for restriction orders must await clarification of an officer's own position. Applications must be determined, to permit document processing and the obtaining of witness statements to occur.[4]

In late 2019, Jonathan Rosenhead started a procedure to overturn a criminal conviction for a public order offence he received after taking part in an anti-apartheid protest in 1972. Now an 81-year-old retired academic, he was accepted by the Inquiry as a core participant after he discovering that one of the men who was convicted alongside him was an undercover police officer. Rosenhead's initial December 2016 application had been put on hold, because he could not provide the name of the undercover officer spying on him. In March 2018, the Inquiry wrote to his lawyer when they released the cover name of HN298, and confirmed the two had been arrested at the same occasion.[5]

As was mentioned in Inquiry documents (see above), Scott’s superiors authorised him to use his fake identity in the criminal trial and to be convicted under his alias.

In December 2019, Rosenhead’s lawyers wrote to the Crown Prosecution Service asking for copies of official documents relating to his conviction, which he plans to lodge an appeal against. 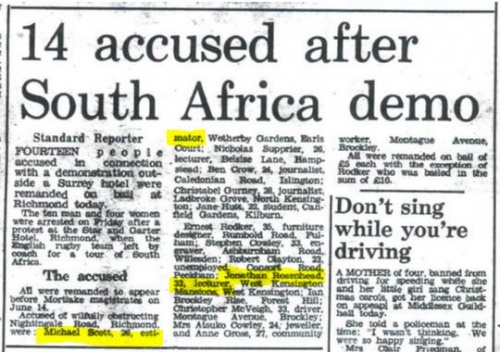 According to Rob Evans in The Guardian:[6] 'Rosenhead, who studied operational research for 50 years at the London School of Economics, was involved in the campaign against apartheid for many years. In May 1972 he took part in a demonstration against the English rugby team which was about to go on tour in South Africa, at a time when campaigners were pressing for a sports boycott of the apartheid state. He and the other protesters blocked a coach carrying the team as it left a Surrey hotel for the airport. They left two locked vans and a car at the entrance of the hotel.

A press report from the time recorded that he had told the court that his name was Scott and that he lived in [Wheterby Gardens,] Earls Court, west London. He also said he worked compiling estimates in the construction industry.

His lawyer Mike Schwarz has also asked the Inquiry for information and documents for the appeal. In his March 2019 ruling, accepting Rosenhead as a core participant, Mitting stated:[5]