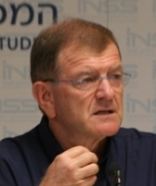 Meir Elran of the INSS in a photo from the INSS website. Accessed 15 November 2012.

Elran served in the IDF where his most senior post was Deputy Director of Military Intelligence (1987-1989). Elran participated in peace negotiations with Egypt and was a senior member of the Israeli delegation to the peace talks with Jordan. Other positions he held in the IDF included Assistant Director of the Research Division for Evaluation and Deputy Commander of the IDF's National Defense College.[1]

Following his retirement from the military, Elran served as the Deputy Director General of the Municipality of Tel Aviv (1989-1994). Later, as private strategic consultant, Elran served a senior advisor to several Israeli ministries, including the Ministry of Education, the Ministry of Internal Security, and the Israeli National Security Council, where he concentrated on social issues relating to national security.[1]

Elran joined the Jaffee Center for Strategic Studies, later incorporated into the Institute for National Security Studies, in 2003.[1]

Elran served (2006-2007) as a special consultant and assistant with the Winograd Commission, investigating the issues surrounding Israeli conduct during the Second Lebanon War. In 2009 he was an international fellow with the US NDU's Near East and South Asia Strategic Studies Center.[1]