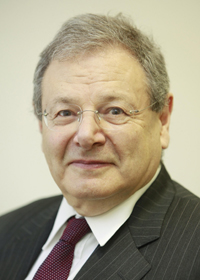 Sir Martin John Gilbert, (born October 25, 1936) is a British historian and the author of over eighty books, including works on the Holocaust and Jewish history. He has been a pioneer of historical atlases, and is best known as the official biographer of Sir Winston Churchill.

Martin Gilbert was born in London to Peter and Miriam Gilbert.[1] He spent some of the war years in Canada as part of the British programme to protect children from the German blitz. After the war he attended Highgate School, and then completed two years of National Service before going on to study modern history at Magdalen College, Oxford, graduating in 1960 with a BA.[2] One of his tutors at Oxford was A.J.P. Taylor. After his graduation, Gilbert undertook postgraduate research at St Antony's College, Oxford. In 1963, he married Helen Constance Robinson, with whom he had a daughter. He has two sons with his second wife, Susan Sacher. [3]

After two years of postgraduate work, he was approached to assist Randolph Churchill, who was writing the biography of his father, Sir Winston Churchill. That same year, 1962, he was made a Fellow of Merton College, Oxford, and he spent the next few years combining his own research projects in Oxford with being part of Randolph's research team in Suffolk, working on the first two volumes of the Churchill biography. When Randolph died in 1968, Gilbert was commissioned to take over the task, completing the final six main volumes of the biography. Gilbert spent twenty years on the six narrative volumes, releasing a number of other books throughout the time. Each main volume of the biography is accompanied by two or three volumes of documents, and so the biography currently runs to 24 volumes (over 25,000 pages), with another 7 document volumes still planned. Gilbert receives no royalties for the biography, but only a small stipend.

In the 1960s, Gilbert compiled some of the first historical atlases. His major works include a definitive single-volume history of The Holocaust, as well as single-volume histories of The First World War and The Second World War. He has also written a notable three-volume series called A History of the Twentieth Century.

Gilbert describes himself as an "archival historian" who makes extensive use of primary sources in his work. Interviewed by the BBC on the subject of Holocaust research, Gilbert said he believes that the "tireless gathering of facts will ultimately consign Holocaust deniers to history." [4]

In 1990, Gilbert was made a Commander of the Order of the British Empire (CBE). In 1995, he was awarded a Knighthood "for services to British history and international relations".[5]. In 1995, he retired as a Fellow of Merton College, but was made an Honorary Fellow. In 1999 he was awarded a Doctorate by Oxford University, "for the totality of his published work". He lives in London. Since 2002 he has been a Distinguished Fellow of Hillsdale College, Michigan, and between 2006 and 2007 he was a professor in the history department at the University of Western Ontario. He continues to lecture around the world on Churchill and Jewish history.

Robert Armstrong arranged for Peter Wright to meet Gilbert in the early 1970s in order to consult the Churchill diaries as part of his research into wartime Soviet espionage.[7]

According to journalist David Leigh, Gilbert attended a dinner party in 1974, at the home of his relative Michael Sacher, where it was claimed that Marcia Williams, the Secretary of then Prime Minister Harold Wilson, was leading a Communist cell at Downing Street. Gilbert told Wilson about the incident. George Weidenfeld later told Wilson that an MI5 officer had been present. Leigh concludes that it was 'clearly someone more senior' than Wright.[8]

Other books on Winston Churchill

Other biographies and history books