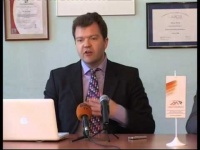 Dr Marko Attila Hoare, the son of Branka Magaš and Quintin Hoare, is a senior research fellow at Kingston University London specialising in the history of South East Europe, in particular of Yugoslavia, Serbia and Bosnia-Hercegovina.

He began studying the history of the former Yugoslavia in 1993.[1]

In 1994, he received a BA in History from the University of Cambridge.[2]

In the summer of 1995, he acted as translator for the aid convoy to the Bosnian town of Tuzla, organised by Workers Aid.[1]

In January-February 2001, he worked as a research assistant at the Bosnian Institute. In February-September 2001, He was a Research Officer for the International Criminal Tribunal for the former Yugoslavia in 2001, and participated in the drafting of the indictment of Slobodan Milosevic.[1][2]

He is an advisory editor of Democratiya: The Labour Friends of Iraq Review of Books, and a member of the editorial board of Spirit of Bosnia, an international, interdisciplinary, bilingual, online journal.[3]

Hoare is a former advisory editor of Democratiya.[4]

Hoare was among the founders of the Henry Jackson Society in March 2005. He severed his connections with the Society in 2012 claiming it had degenerated and had changed beyond recognition from how it was when it was first established.[5]