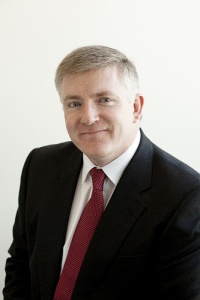 Mark Prisk has been the Conservative Party MP for Hertford and Stortford since 2001.[1]

Prisk was minister for business and enterprise at the Department for Business, Information and Skills from May 2010.[2] He was appointed minister for housing in the September 2012 Cabinet reshuffle.[3] but was asked to leave this post in the October 2013 reshuffle.[4] [5]

Soon after leaving the Cabinet, the ex-housing minister took on an advisory role for Essential Living, a developer and operator of private rental homes in the UK, to provide strategic advice on housing policy.[7] He remains an MP.

Mark Prisk received a letter dated 25 May 2010 from Conservative Party donor Andrew Cook arguing that a proposed £80 million loan to the firm Sheffield Forgemasters should be cancelled. Labour MP Clive Betts argued that there were several letters submitted to the consultation over the loan but the only letters arguing against the loan came from Andrew Cook.[8] Cook wrote to Mark Prisk again on the 9th June arguing that the loan would be "in breach of EU State Aid Regulations".[9]

The loan was cancelled by the government on 17 June 2010. Mark Prisk argued that, "The department did receive an email from Mr Cook's company and whilst it was noted like every other representation, it had no bearing on the decision-making process."[10]