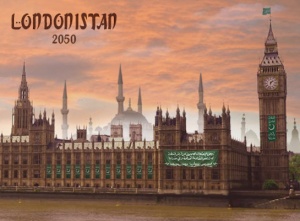 Londonistan is a sub-genre of the Eurabia theme, a pejorative reference the British capital popularized by neoconservative polemicist Melanie Phillips in her book Londonistan: How Britain is creating a terror state within (2006) in which she warns against Islamism's alleged take over of Britain (Although the use of the word precedes Phillips's book)[1]. The word is a portmanteau of 'London' and the Persian suffix 'istan', meaning 'land' (as in Pakistan). In an article in the Times, Phillips noted what she called 'Britain’s dirty little secret':

that from the 1990s, Islamist radicals had been given free rein in Britain in a “gentlemen’s agreement” that if they were left alone, they would not turn on the country that was so generously nurturing them. The result was “Londonistan”, as Britain became the hub of al-Qaeda in Europe.[2]

Londonistan, Phillips writes, is the manifestation of a 'cultural pathology', of 'a profound loss of cultural nerve'. The problem for Phillips lies in 'a refusal to acknowledge that Islamist extremism is rooted in religion'. And implicated in this conspiracy with the Islamists are 'Britain’s governing class — its intelligentsia, its media, its politicians, its judiciary, its Church and even its police'. The British, she writes, 'have signed up to the false narrative of those who are laying siege to their society.'

The doctrines of multiculturalism and minority rights, themselves the outcome of a systematic onslaught by the British elite against the country’s own identity and values, have paralysed the establishment, which accordingly shies away from criticising any minority for fear of being labelled as bigoted.[3]

The problems began when, according to Phillips,

Britain effectively allowed itself to be taken hostage by militant gays, feminists or “anti-racists” who used weapons such as public vilification, moral blackmail and threats to people’s livelihoods to force the majority to give in to their demands.[4]

The term has since been picked up by neoconservative writers Christopher Caldwell[5], Irwin Stelzer[6] and Christopher Hitchens[7] who have introduced it to the US media.