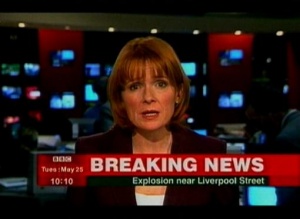 Kirsty Lang on Panorama's London Under Attack drama, broadcast on 16 May 2004

Kirsty Lang is a radio and television presenter who has worked at the BBC and Channel 4 and also worked for a time in print journalism for the Sunday Times. She is married to Misha Glenny,[1] another former BBC journalist who is also an expert on Eastern Europe and the Balkans.

Lang was born in 1962. She took a degree in International Relations at the London School of Economics and in 1984 took a postgraduate diploma in journalism at City University in London. City University boasts that it has one of the ‘foremost Journalism departments in the UK’, with famous graduates such as Lang and the BBC Presenter Dermot Murnaghan. The Head of Department is Adrian Monck, a former Executive Producer of Sky News.[2]

In 1986 Lang joined the BBC News Trainee Scheme and started news reporting for BBC Radio 4,[3] working on programmes including Today and the World at One.[4] From 1989 to 1991 she was the Central European reporter for BBC World Service based in Budapest, covering the fall of the Berlin Wall and Balkans conflict, and went on to be the BBC's Paris correspondent for both television and radio.[5],

Lang was a member of the controversial PR company Editorial Intelligence a position she resigned from in 2006[9] She is a client of Knight Ayton Management [10] who represent news and current affairs presenters, JLA [11] which describes itself as ‘Europe's leading full-service speaker bureau and talent agency for corporate and industry events’[12] and CMM[13] who advertise themselves as ‘The UK Public Relations & Advertising Industry's Preferred Celebrity Booking Agency & Keynote Speaker Bureau’

In 2001 Lang took part in the RSA event "RSA Morgan Stanley Lecture - Britishness"[14] where she chaired a discussion on British identity. Speakers at this event were Tom Bentley (Director of Demos), Sukhvinder Stubbs (Chief Executive of the Barrow Cadbury Trust), Nick Pettigrew (Associate Director at MORI), Professor Kenneth Minogue (London School of Economics who also sits on the board of Directors at the Centre for Policy Studies[15] and is a trustee of Civitas[16] and Paul Crake (Programme Director RSA) & former Communication Director of the Design Council[17].

For Jewish Book Week in 2006, Lang chaired a discussion of Alan Kaufman's book Matches and Ryan Craig's play What we did to Weinstein.[18]

On media and PR

In reference to an article for the Evening Standard in 2001 David Rowan quotes how Lang made the following observations about the media:

As to whether news is 'Manufactured' or made up for the titillation of the consumer: let's look at some of the stories dominating our headlines this August. The Hamiltons; British troops in Macedonia; the missing 15-year-old Danielle Jones; four hospital deaths caused by blocked oxygen tubes; a possible cure for CJD. Of all these stories, only the Hamiltons could possibly be 'Manufactured' — with the help of a PR agent. It's true that PR agents and government spin doctors are becoming more and more sophisticated at manipulating the media, but, equally, journalists and the public are becoming more cynical about what is put in front of them.[19]

In a 2006 Washington Post article exploring how ‘some members of the media have collaborated with the spread of this misleading and drastically oversimplified language’, Lang is quoted as follows: