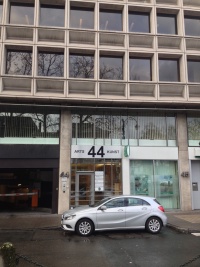 Ketchum is one of the largest public relations agencies employing over 1100 people across 21 offices and with 35 affiliates around the world.[1] It is owned by Omnicom.

In 1923 by George Ketchum formed Ketchum Communications as a Pittsburgh-based advertising company which later evolved to include a public relations practice.

In 1996 it became a subsidiary of the Omnicom Group with its work consolidated into five practice areas Brand Marketing, Corporate, Food & Nutrition, Healthcare and Technology.

In 1991 a leaked memo from Ketchum, hired by the Clorox Corporation to develop a crisis management plan, detailed proposed responses to a number of hypothetical scenarios, including a peaceful protest by Greenpeace at a Clorox factory. Among the recommended tactics was the launch of a "Stop Environmental Terrorism" public relations campaign.[2]

Ketchum and the Armstrong Williams scandal

In 2003, the U.S. Department of Education signed a $700,000 contract with Ketchum to do "rankings of newspaper coverage of the No Child Left Behind law" and to produce a video news release (VNR) touting the law, which featured Education Secretary Rod Paige and promoted a tutoring program offered under the new law. The VNR, narrated by faux reporter Karen Ryan (actually a PR pro), generated controversy since it "comes across as a news story but fails to make clear the reporter involved was paid with taxpayer money." A similar VNR promoting the Bush Medicare law was found by the Government Accountability Office to be covert propaganda in violation of federal law. [4]

Download Ketchum's contract with the U.S. Department of Education, to promote the No Child Left Behind Act (1.6 MB PDF file).

Documents obtained on Ketchum contracts with the U.S. Department of Education through a FOIA request from the People for the American Way are available for download here.

According to the U.S. House Committee on Government Reform Minority Office, Ketchum received the following amounts per year, for federal PR contracts: [5]

The firm's website and the Public Relations Society of America's database of Silver Anvil Award Winners indicate that Ketchum has worked for the following federal agencies, in addition to its Education Department work:

In May 2005, a PR Week story on the Centers for Medicare and Medicaid Services request for proposals on its outreach work over the next five years reported that, "Under the last umbrella contract ... Ketchum led a $25 million integrated marketing campaign to drive people to the Medicare (800) number and website." [6]

Despite the controversy over the Armstrong Williams contract, Ketchum won a a $25 million contract, including $2 million in fees, to manage the advertising campaign as part of a $300 million, three-year U.S. government effort encouraging seniors to sign up for the new Medicare prescription drug program.

The Washington Post reported, "HHS officials say Ketchum got the new work because it already had a multiyear contract to provide public relations services for the department. The firm promised the new ads will not cross the legal line." HHS's Kathleen Harrington said that seniors trust Medicare information more when it comes from the government, so "it's in the interest of our success ... to label everything appropriately." [7]

In November 2014 Ketchum ended the bulk of its work for the Russian Federation in the US and Europe due to tensions between the West and the country. A statement from the firm said 'Ketchum no longer represents the Russian Federation in the US or Europe with the exception of our office in Moscow'. 'Our partner in the consortium, [ Omnicom subsidiary GPlus ], continues to operate under the terms of the contract'.

Ketchum were paid nearly $23 million by the Russian federation from 2006 through mid-2012, according to ProPublica, as well as $17 million by energy giant Gazprom.[3]