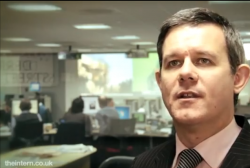 Kenny Campbell, editor of Metro and adviser to the Science Media Centre, Credit: Still from Youtube video by intern.co.uk.

Kenny Campbell has edited Metro since 2001.[1] Before that, he worked on various Scottish regional daily and evening titles including the Aberdeen Press and Journal and the Edinburgh Evening News.[2] He also held senior roles at the Daily Mail and Express. He was night editor with the Scottish Express in Glasgow[3] from where he was recruited as Deputy Editor for Metro’s take-off in 1999.[1]

According to His Metro biographical note: 'Born in Scotland, Kenny once used to sell knickers and milk (he had a part-time job at M&S). He describes his route into journalism involving an extra night with a girlfriend, a free newspaper and a heart attack![1]

Campbell has been an adviser to the Science Media Centre since 2004. A 2012 biographical note on the website of the Association of British Science Writers states that:

Kenny’s formal education in science ceased when he left school but his fascination for science and engineering has never left him. This is what comes of growing up in an era when Thursday meant two things: Tomorrow’s World and Top of the Pops. In that order. Blame Baxter, Burke, Hann, Rodd, Woollard and the like. Kenny has been involved with the Science Media Centre since its early days, offering wonderfully little scientific insight but willingly taking a populist view about how the media and the scientific community should interact (hint: make it interesting).[2]

Speaking at the 2012 UK Conference of Science Journalists on a panel with Fiona Fox of theSMC, Campbell noted that he:

doesn’t employ any science journalists. He believes it is an advantage to have non-specialists writing to make it easy for anyone on the Northern line at 8am to understand. With 4.8 million readers to entertain and engage with each day, he plays to the audience and wants “more pictures of mice with ears on their backs”. His suggestion to aspiring science journalists was to become a general journalist first and find out what the public are interested in, rather than deciding to focus on science.[5]