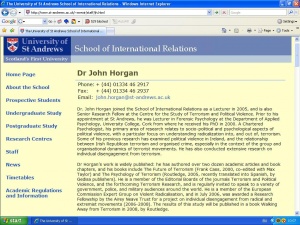 Horgan's profile on the University of St Andrews website, showing that he sits on the expert group

John Horgan is an expert on the psychology of terrorism. He is based at Penn State University in the United States where he is Director of the International Center for the Study of Terrorism (ICST). Horgan was previously a Senior Research Fellow at CSTPV and taught several courses at St. Andrews including Terrorism and Liberal Democracy with Paul Wilkinson.

Horgan received his PhD from University College, Cork in 2000 where he went on to teach Forensic Psychology at the Department of Applied Psychology. While based in Ireland, he conducted research on the activities of the Irish Republican movement, and in particular published a series of noted articles on the fundraising operations of the Provisional IRA.[1] In 2005 he joined the School of International Relations at St. Andrew’s University as a lecturer and Senior Research Fellow at the Centre for the Study of Terrorism and Political Violence.[2] In July 2006, was awarded a Research Fellowship by the Airey Neave Trust for a project on individual disengagement from radical and extremist movements (2006-2008). The results of this study will be published in a book Walking Away from Terrorism in 2008, by Routledge.[3] On 1 November 2007 Horgan became the new Director of the International Center for the Study of Terrorism (ICST), a terrorism research centre based at Penn State University.[4]

Horgan is a member of the Editorial Boards of the journals Terrorism and Political Violence, Terrorism Research, and the Journal of Investigative Psychology and Offender Profiling.[5] Horgan was also a former member of the European Commission Expert Group on Violent Radicalisation whilst he was at St Andrew, but resigned from the group on 29 October 2007,[6] just days before he took up his new post at ICST.