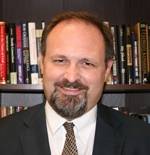 Jeff Breinholt is a Department of Justice prosecutor who took a year's leave to work in several private terrorism research institutes between May 2007 and May 2008.[1] During that time he was a contributor to the NEFA Foundation Counterterrorism and Education Programs, a Director of Counterterrorism Blog and a Director and Senior Fellow at the International Assessment and Strategy Center.

Jeff Breinholt is a NEFA Foundation Contributor, Counterterrorism and Education Programs, and is on a one year sabbatical from the Department of Justice, National Security Division. Until June 2007, Mr. Breinholt served as Deputy Chief of the Counterterrorism Section at the U.S. Department of Justice. Shortly after 9/11, Mr. Breinholt was appointed head of the Department of Justice’s terrorist financing enforcement program, and helped found a special FBI unit devoted to U.S.-based fundraising by international terrorist organizations and managed a team of financial prosecutors within the Counterterrorism Section dedicated to prosecuting material support crimes. In 2003, he was honored with the Attorney General’s Award for Excellence in Furthering the Interests of U.S. National Security, for his work in crafting creative legal theories that resulted in the initiation of several important prosecutions in the aftermath of 9/11. A white-collar fraud specialist, Mr. Breinholt joined the Justice Department in 1990 with the Tax Division, and spent six years as a Special Assistant U.S. Attorney in the District of Utah before joining the Counterterrorism Section in 1997. He is a frequent lecturer on law enforcement and intelligence topics. He is the author of several articles and two books, Counterterrorism Enforcement: A Lawyer’s Guide (DOJ Office of Legal Education 2004), and Taxing Terrorism, From Al Capone to Al Qaida: Fighting Violence Through Financial Regulation (2007).[3]