Jarret M. Brachman is a terrorism expert and the former Director of Research in the Combating Terrorism Center at West Point. He claims to be an expert on 'Jihadist ideology, strategy and propaganda'. [1] 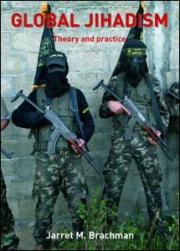 Brachman has a PhD from University of Delaware. In 2003, while completing his PhD, he served as a Graduate Fellow at the CIA’s Counterterrorist Center. In 2004, Brachman joined the Combating Terrorism Center. Brachman became the CTC’s first Director of Research and oversaw a number of research projects about al-Qaida ideology and strategy. [2]

In 2008 Routledge published Brachman's book Global jihadism: theory and practice. In the Acknowledgments section of the book Brachman expresses his ‘sincere hope’ that the book ‘serves as a resource’ for ‘the quiet heroes of this war,’ namely the ‘brave men and women who selflessly dedicate their lives to public service in the professions of arms, law enforcement, intelligence, first response and emergency management’. [3]

In 2008, he resigned from the West Point CTC and joined North Dakota State University.