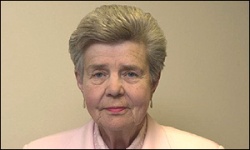 Janet Mary Baker Young, Baroness Young PC (23 October 1926 – 6 September 2002), was a British Conservative politician. She served as the first ever female Leader of the House of Lords from 1981 to 1983, first as Chancellor of the Duchy of Lancaster and from 1982 as Lord Privy Seal.

In later life she was mainly known for her staunch opposition to gay rights. She worked to try to stop legislation going through that would allow unmarried couples (including gay men and women) to adopt children, and also led campaigns in the House of Lords to prevent equalisation of the age of consent for homosexual men with that of heterosexuals, and also fought the repeal of Section 28. She was ultimately defeated on all counts. Although she managed to delay the repeal of Section 28 in England and Wales in 2000, Section 28 was finally removed from the statute book in 2003.

She died at the age of 75 following a long battle with cancer. Following her death, human rights campaigner Peter Tatchell declared that she had 'poisoned society with prejudice and intolerance" and that "future historians will rank her alongside the defenders of apartheid. She supported homophobic discrimination to the last.'[1]

Tim Montgomerie, then Chairman of the Conservative Christian Fellowship, said that "Baroness Young led a life of great service to Christian causes. She defended marriage and the family against an onslaught of damaging legislation in recent years. Unlike many of today's politicians and churchleaders, she refused to accept that the breakdown of the family was inevitable and she invested every effort into standing up for the interests of vulnerable children. If only more Christians followed her example and sought political office, the country would, perhaps, not face the same difficulties that it does. She will be sadly missed."[2]

Lord Strathclyde, shadow leader of the Lords, said: "She had fought her illness with an immense courage that was an inspiration to all who knew her and with that spirit of unflinching Christian faith that was the core of her life.."

In later life Janet Young became known to millions of people in connection with her many campaigns, most notably in connection with family values and for the protection of children. Indeed, she became a household name, with a personal postbag that was probably larger than that of any peer. Whether you agreed with her or not, no-one could fail to be impressed by her integrity, her courtesy, the clarity with which she always expressed her views and her immense personal kindness. She was a trusted friend and a wise counsellor, a giant figure in the House of Lords and, indeed, her public life. She will be sorely missed now. But she will be long-remembered. [3]