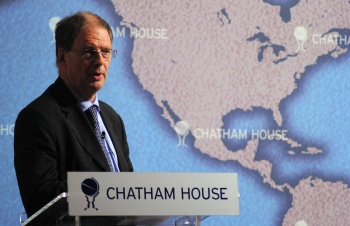 James Arbuthnot (Lord Arbuthnot of Edrom) was the Conservative MP for Wanstead and Woodford from 1987 to 1997 and North East Hampshire from 1997 to 2015. He decided not to stand in the 2015 general election and was replaced by Ranil Jayawardena.[1]

Shortly after standing down as an MP, Arbuthnot, a former defence procurement minister in the 1990s and a member of the House of Commons Defence Committee until 2014, joined the Thales UK Advisory Board on 11 May 2015. Upon his appointment, Thales stated that its advisory board members were 'expressly prohibited from lobbying on behalf of Thales UK and are not formal officers of the company'.

Arbuthnot served as a councillor for Royal Borough of Kensington and Chelsea from 1978 to 1987.[2]

He has been chair of the Defence Select Committee since 2005.[2]