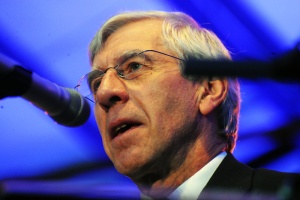 Jack Straw and the Blackburn Report

In a secret report produced by the Joint Terrorism Analysis Centre (JTAC) on Islamic extremism in Blackburn, "concerns" have arisen regarding Jack Straw's links with the Muslim Council of Britain (MCB).[1] Anxieties regarding these links have escalated due to the recent controversy surrounding the MCB Deputy General Secretary, Daud Abduallah's signing of a public declaration supporting Hamas in response to Israel's 2009 military strikes in Gaza. [2] ‘A senior security figure’, who reviewed the report stated: "Jack’s a bit too close to the MCB — he sometimes appears to suggest they are the only game in town. There is a concern that proximity to them may colour [his] judgment”.[3]

<youtube size="medium" align="right" caption="Channel 4 Dispatches / Telegraph | Jack Straw">hpNm8FjbbcA</youtube> In February 2015, a recording was released of Straw being interviewed by two reporters for Channel 4's Dispatches and the Telegraph, posing as consultants working for a Chinese company. The reporters had emailed 12 MPs asking whether they would be interested in joining a Chinese company's advisory board - half did not respond, one wanted to carry out due diligence and the others were interested. The other MP to be filmed was former Conservative minister Sir Malcolm Rifkind.

The meeting with Straw was held in his Commons parliamentary office; which is a breach of the rules as offices should not be used for 'party political campaigning or private business activity'.

Straw said, 'We have to declare down to the last penny - which is slightly boring', 'If I'm doing a speech or something, it's £5,000 a day, that's what I charge.' When asked what else he brings he said, 'I'm well aware of the fact that I bring my name' and 'I know everybody anyway, I've got their phone numbers'.

When asked by the reporters about him standing down as an MP in the 2015 General Election, Straw said he would be able to to do a lot more for you [the Chinese company] and "It's better if I'm outside'. He also said he would not take the advisory position if he were going to remain an MP and if he joins the House of Lords, 'The rules there are different and plenty of people have commercial interests there … I’ll be able to help you more,” he said.

Straw also boasted that, on behalf of ED & F Man Holdings - who pay him £60,000 a year, he had met and persuaded the Ukrainian prime minister to persuade him to change laws which were negatively affecting the company, and that he had met the relevant director general in the European Union and changed the sugar regulations to help the firm. He said, 'I mean … the crucial thing about this, it’s all, it’s public that the regulations have been changed, but the best way of dealing with these things is under the radar'.[4]

Straw was, however, keen to emphasise that his 'day job' as an MP was his 'first responsibility'.

The MP agreed to suspend himself from the parliamentary Labour Party and referred himself to the Parliamentary Standards Commissioner, Kathryn Hudson. [5]

In September 2015, the commissioner cleared both Rifkind and Straw of charges that they acted in breach of the code of conduct or the rules of the House [6]. In response to the allegations, Parliament implemented a ban on former MPs taking up work as as paid lobbyists for six months after stepping down. [7]

Jack's son Will is a Labour candidate for the 2015 General election for Rossendale and Darwen, the founding editor of LeftFootForward.org and an associate director at Institute for Public Policy Research. He has been dubbed a 'red prince' along with the children of other key members of New Labour who are becoming involved in politics, such as Euan Blair and David Prescott.[8]