The International Association for Counterterrorism and Security Professionals (IACSP) is purportedly a membership organisation for security professionals. It is based in Arlington, Virginia, and is part of a network of rightwing organisations based in the United States with close links to Israel and an enthusiasm for the military and security sectors. It publishes the Journal of Counterterrorism & Homeland Security International.

IACSP's website currently provides no detailed history but accounts it has given in the past have stated it was set up in 1992. [1] The business directory manta.com (which bases its data on Dun & Bradstreet companies information) lists IACSP Inc as having been established in Arlington, Virginia in 1992 as a Political Action Committee; a private organisation formed to make donations to political campaigns. It states that the organisation has no physical address – meaning that it is based at a PO Box. 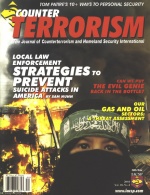 That record notwithstanding there is little evidence of IACSP’s existence until five years later in 1997. That year Steven Fustero set up the various websites associated with the organisation. Earlier in October 1996, Fustero had registered specialoperations.com, [2] a website originally run by a man called Tom Hunter, providing information for military enthusiasts interested in US Special Forces operations. [3]

In 1997, as well as setting up the various websites, IACSP launched its magazine, the Journal of Counterterrorism & Homeland Security International, and set up its Washington based not-for-profit foundation, the Counterterrorism & Security Education and Research Foundation (CTSERF). According to the not-for-profit website Tax Exempt World, CTSERF was granted tax exempt status in March 1999, c/o EDWARD V BADOLATO. Its registered address was given as 4200 Wisconsin Ave, NW 128, Washington, DC 20016-2143. [4]

CTSERF is essentially a tax avoidance entity set up to collect funds from donors and commission research to IACSP. The accounts also suggest that research grants are allocated by IACSP on behalf of CTSERF – perhaps to avoid disclosing details of the grants’ recipients. An explanatory note in the Foundation’s 2001 tax returns reads as follows:

IACSP is affiliated with a number of websites, primarily iacsp.com, but also Securitynet.net, which sells IACSP merchandise and security equipment such as anti-bugging technology and CCTV systems, and antiterrorism.org which also displays a selection of security equipment as well as a ‘book store’. These websites were all set up in April 1997 and registered to Steven Fustero. [7]

The most important figure in IACSP appears to be Steven Fustero, who set up IACSP’s website and the various affiliated website described above in 1997. In October 1998 the Washington Times reported that Edward Badolato was executive director of the IACSP. [9] Badolato is an energy and security industry executive who was a Deputy Assistant Secretary at the Department of Energy under Presidents Reagan and Bush I.

The Foundation’s first tax returns were filed in 1999. That first form stated that Steven Fustero was President of the Foundation, whilst Phil Friedman and Richard Horowitz were secretary andtreasurer respectively. 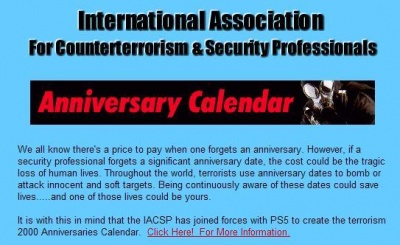 In 8 December 1998 an unidentified “Manhattan public relations firm” unveiled a “glossy color calendar” published by IACSP featuring anniversaries of previous terrorist attacks. The Press Association reported that “The calendar is the brainchild of Long Island University Professor Harvey Kushner,” who it reported “doubles as a consultant for various government agencies.” [11]

IASCP produced a similar calendar for 2000 which was developed with the British security company PS5. ‘The Terrorism 2000 Anniversaries Calendar’ was ‘Printed on high quality, coated stock, depicting the anniversary dates of major terrorist attacks throughout the world.’ [12] A section on IASCP’s website offered the calendar for sale for $19.95, urging customers to ‘Study the calendar carefully and always be vigilant.’ [13]

In August 2004 IACSP co-hosted a series of conferences in Washington with the lobbying company Public Policy Partners to "[examine] the impact of the 9/11 Commission's findings on the upcoming Presidential race and political contests nationwide." [14] Andrew Cochran, who moderated the event was senior vice president of Public Policy Partners, which later merged with GAGE. He worked as a lobbyist for Steve Emerson and later founded Counterterrorism Blog.

According to a report of the first meeting by PR Newswire: "The panelists were: Steven Emerson, author and executive director of The Investigative Project in Washington, D.C.; Bill West, INS former chief of National Security in Miami; Clifford May, veteran journalist and president of the Foundation for the Defense of Democracies; and Larry C. Johnson, a former CIA analyst and co-founder of BERG Associates. The moderator was Andrew Cochran, senior vice president of Public Policy Partners." [15]