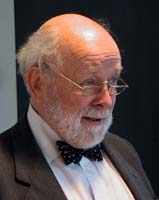 Ian Fells is a paid consultant to the nuclear industry, who has been consistently pro-nuclear. He is the principle consultant to Fells Associates and also a fellow at The Royal Academy of Engineering. He was the president of The Institute of Energy for 1978-79. From 1987 to 1998 he was a science advisor to The World Energy Council. He is an associate at Incoteco, a company run by Hugh Sharman who is routinely used by the anti-windfarm organisation Country Guardian. Since 1975 he has been a Professor of Energy Conversion at the University of Newcastle, which also uses Fells Associates for PR services.

From 2003 until September 2005 Fells was the chairman of the New and Renewable Energy Centre (NaREC) in Blyth. [1]

A typical quote from Fells is: "Nuclear energy is one of the safest, cheapest, cleanest and most reliable ways of generating electricity but it has been demonised by the press," he says. "The Government is phasing it out even though its adoption would allow us to meet our carbon dioxide targets. Frankly, politicians don't think that there are votes in nuclear power -but the public isn't as daft as they think. Sixty per cent of us are perfectly happy to have nuclear power stations." [2]

Fells was one of the speakers at a conference on wind energy in Scotland in July 2004: "There is no doubt that we need all the carbon dioxide free electricity we can get but predicating this almost entirely on wind when there are other, less obtrusive technologies seems simplistic, stubborn and perverse" he said. "If we are even to approach the 20% reduction in CO2, which the government is dedicated to, and a 60% reduction by 2050, refusing to include nuclear power in the mechanism seems inexplicable unless some sort of political correctness is responsible for this decision. Things may change however, according to a recent statement by the Prime Minister. What is require [sic] is "CLEAN";, carbon dioxide free, energy and that means as much renewable and nuclear energy as we can muster". [3]

Whilst he does not appear to be a member of SONE or BNES, he will go and speak to these groups. He addressed a British Nuclear Industry Forum meeting in 1996/7. [4] He spoke at the BNIF fringe meeting at Labour's party conference in 2001 and finished "by arguing that nuclear energy should be part of Britain's future energy strategy".[5] Also that year he spoke to the Western Branch of the British Nuclear Energy Society[6] and wrote in The Nuclear Engineer - the journal of the Institution of Nuclear Engineers.[7] In 2002, Fells addressed the Special Interest Group on Waste Management & Decommissioning group of British Nuclear Energy Society in a joint meeting with Imech.[8]

In April 2003, he addressed SONE. This was reported in their newsletter: "Worse still, Professor Ian Fells, at a well-attended meeting of members at Sellafield in April, revealed that the DTI had ignored its own market model in reaching the conclusion that nuclear was uneconomic. That model showed that renewables could, in certain circumstances, be 250% more costly than nuclear." At the same meeting, Keith Parker, a member of SONE's committee, disclosed that the nuclear industry had made a big effort to provide a substantial chapter for the EWP on what needed to be done to preserve the nuclear option but this had been reduced to two paragraphs.[9]

He is obviously a supporter of Bernard Ingham too, with a professional relationship that dates back to 1988. In February '88, the Financial Times reported "Bernard Ingham, who has been Margaret Thatcher's Press Secretary almost since she became Prime Minister, is being tempted to leave and take up a new post as an academic. The offer comes from the University of Newcastle which is seeking to establish a new Centre for Government Communications and has already raised about half the £400,000 Pounds or so required to finance the first five years. Ingham is one of three candidates, though clearly the preferred one, to direct it. He is understood to have shown considerable enthusiasm and to have discussed the matter with the Prime Minister who says that she wants him to stay. The key figures behind the project are Hugh Berrington and Ian Fells, professors of politics and energy studies respectively."[10]

It does not seem that the venture came off. However, since then, he wrote letters to the Times in support of Ingham in 1999: "It seems to me that the way ahead must lie with "clean energy", which is a mix of renewable and nuclear energy. There is a synergy between them which is becoming apparent." [11] In 2000, he wrote: "The recent announcement of the closure of Bradwell nuclear power station in two years' time (report, Business, December 2) highlights the complaint made by Sir Bernard Ingham in his letter (December 21) and presents a dilemma to the Government."[12]

The support from Ingham is reciprocated: In response to Regen's request to come and speak, Bernard Ingham declined due to prior engagements but wrote:

"If you want facts - which you most certainly will not get from Juniper - then Professor Lovelock, who lives near Launceston, would be an admirable speaker. So might Professor Michael Laughton of Imperial College. Professor Ian Fells is another who comes to mind. Alternatively, you might find Professor David Bellamy as [sic] man who would usefully inject some common sense into the renewables debate. If you have any problems with finding a speaker, you might get in touch with Angela Kelly."

Fells also has links to the political right. He wrote a briefing paper for the Adam Smith Institute, called "A Cloudy Energy Future" in February 2003.[13] In March 2004, the ASI held an International Energy Symposium at which Fells spoke.[14]

In October 2005, the Insight team of The Sunday Times newspaper reported serious allegations concerning Ian Fells in an article called “'Green' adviser takes cash for access to ministers.”[15] The main allegations have been removed from this site after a complaint by Ian Fells and the threat that reproduction of them could bring legal action (see below).

In November 2005, Fells wrote to the Chemical Engineer magazine, saying he was “appalled” by The Sunday Times allegations. He continued: “I would like to say that I have never been paid to arrange lobbying meetings with ministers and I have never been a paid advisor to government; my advice, when asked for, has always been free, and as objective as I can make it. I have acted as special adviser to several select committees of the House of Lords and House of Commons giving technical advice and received a modest honorarium. These are, of course, not government committees. When operating in the sensitive area of renewable energy and nuclear power, where large amounts of money are involved, I am resigned to the fact that from time to time one may be subject to attack, criticism or comment.”

Associated with Fraudsters and Convicted Criminals

The Sunday Times also reported how the paper had "learnt that Fells also put a green energy company in touch with government officials to seek grants." The paper pointed out that the company, of which Fells was a director, was run by a serial fraudster and convicted criminal.

The company concerned is called Pure Electricity, although The Sunday Times reported it as Pure Energy and Power plc. According to The Sunday Times "The company's chairman is Ronald Nathan, a struck-off solicitor who has been jailed three times for fraud. He met his fellow director John Rees in prison. Although Nathan is disqualified as a director, he has reinvented himself as Dr Stephen Nathan and changed his birth date to set up the company fraudulently."[16]

Fells volunteered to The Sunday Times that his role for the Pure companies was to "get involved when they need some technical advice or when they need a minister talking to or somebody like that, which I can do without any difficulty."

When confronted about the true identities of those who ran Pure Electricity, Fells was said to be "appalled." He resigned from the company immediately.[17]

When we reported what The Sunday Times had published, Ian Fells contacted NuclearSpin. He wrote: “You have chosen to publish on your internet site some damaging and untrue allegations about me taken from two articles in the Sunday Times. The articles are, unsurprisingly, the subject of legal complaint and should not be quoted as further publication could also attract legal action".

"Under "cash for access", I have never arranged meetings with ministers for cash; neither did I arrange for Nathan or Rees to meet government officials (see a statement published in "The Chemical Engineer" November 2005, (reprinted above). My diaries and accounts have been scrutinised for any evidence of meetings or payments and there are none”.

He also says he “was a director of Pure Electricity which never got as far as trading and as soon as I discovered that Nathan and Rees were alledged to have criminal convictions for fraud, which is not at all easy to find out, I resigned immediately. I had taken them at their word that they wanted to set up companies to market "green" energy, which I approve of".

"Perhaps I can just add that I have always said that we will need as much renewable energy, as well as nuclear energy, as we can lay our hands on if we are ever to reduce CO2 emissions to acceptable levels. After all, I set up and ran the New and Renewable Energy Centre NaREC for three years from 2002 to 2005".[18]