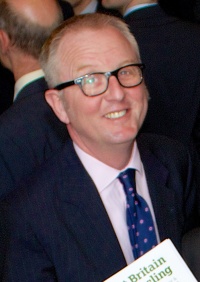 Ian Austin (born 6 March 1965) is a British politician who was MP for Dudley North. Austin was elected in 2005 and in 2010 he was re-elected with a majority of 649 votes. [1] He was re-elected in 2015 after increasing his majority to 4,181.[2]'. Formerly a member of the Labour Party, he resigned from the party on 22 February 2019 to sit as an independent. He served as Parliamentary Under-Secretary of State at the Department for Communities and Local Government from 2009 to 2010.

Austin is a former deputy director of communications for the Scottish Labour Party (working for Gordon Brown), he was brought in as Brown's spin-doctor as a replacement for Charlie Whelan in June 1999. He had previously been the Labour Party's West Midlands press officer, since 1995 and is now, July 2007, Brown's PPS. [3]