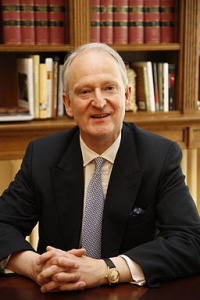 Henry Bellingham (born March 1955) was parliamentary under secretary of state at the Foreign and Commonwealth Office[1] from May 2010 until September 2012 when he was replaced by Mark Simmonds in a cabinet reshuffle.

He has been the Conservative Party MP for North West Norfolk since 1983, retaining his seat in the 2015 general election with a majority of 13,948. [2]

Bellingham studied Law at Magdalene College, Cambridge. Having graduated in 1977 he was called to the Bar (Middle Temple) where he served as a barrister for 8 years.

In 1983 Bellingham was elected as MP for Norfolk North West. He was Parliamentary Private Secretary to Malcolm Rifkind as Secretary of State for Transport and for Defence and as Foreign Secretary (1991-97).

Prior to being re-elected as an MP in 2001, he ran his own consultancy practice specialising in advising firms on inward investment.

According to the MP's Register of Financial Interests:

Name of donor: Sir Michael Bishop
Address of donor: private
Amount of donation or nature and value if donation in kind: £25,000 for help with my responsibilities as Shadow Minister for Justice.
Date of receipt: 10 March 2010
Date of acceptance: 10 March 2010 Donor status: individual (Registered 12 April 2010) [4]

Since October 2013, from Bellingham's roles as non-executive director of Developing Markets Associates, chairman of Pontus Marine and non-executive chairman Pathfinder Minerals, he earned £66,355 for 107 hours work.