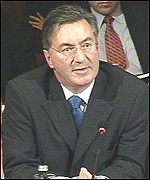 Gordon Beattie is the founder of Beattie Media one of the biggest and most controversial PR firm in Scotland.

Beattie Media came to public attention in September 1999 when The Observer newspaper published a sting on two key employees, Kevin Reid, son of then Scottish Secretary John Reid, and Alex Barr [1]. The Observer sting had been inspired by a tip-off from a senior Labour party source, who was ‘appalled’ at the flood of job offers from lobbying consultancies ‘who wanted him to basically call in all the favours he was owed on their behalf’ (Dean Nelson on Radio Scotland, October 1999). This story quickly developed into the first crisis of the Scottish Parliament and was dubbed 'Lobbygate'.

Reid and Barr were asked about their contacts with politicians and what differentiated Beattie Media from competitors. Barr mentioned his former colleague Jack McConnell was now Minister of Finance in the Scottish Executive. He also pointed out that the Beattie Media did ‘a lot of [PR] work with the public sector, and with large corporate organisations and we are constantly involving politicians in launches, exhibitions, speeches, presentations, that type of thing’ (Observer transcript, 1999: 3) [2]. Barr stressed Beattie Media’s links to the business community in Scotland:

"We’re in contact on a very regular basis, not only with politicians and the Scottish Office (sic), but also with business journalists, industry journalists, and movers and shakers within local authorities and local enterprise companies…So we’ve got our finger on the pulse of what’s happening in business and in construction". (Observer transcript 1999: 6)

Beattie Media were well known in Scottish business circles for their ability to win public sector contracts, and had close ties to the Labour Party

Jack McConnell had taken a job with Public Affairs Europe in April 1998, in between resigning as General Secretary of the Scottish Labour party, and being nominated as a candidate to contest the 1999 Scottish elections for the Labour party. Public Affairs Europe was a joint venture into the growing lobbying business in Scotland between Beattie and Edinburgh law firm, Maclay Murray Spens.

Alex Barr outlined the rationale for employing McConnell: "We appointed Jack McConnell … to head up our public affairs consultancy, in the certain knowledge that Jack would get a safe seat from the Labour Party, and in the hope and expectation that he would also get a cabinet position within the new administration. So we knew that Jack was going to leave us". (Observer transcript 1999: 2)

So McConnell was given a job to use his contacts for the commercial benefit of the lobbying firm, and no doubt to be a useful contact in government. Gordon Beattie tried to crisis manage this scandal by offering an immediate unreserved apology for the boasts of his employees. However, this was not enough to draw a line under the affair. A full scale parliamentary inquiry followed, which meant more humiliation for Beattie and his reputation as a PR guru.

"There are professional bodies, in inverted commas, the Scottish PRCA, which we’ve refused to join because we think it’s a waste of time. There’s also ASPA ... ASPA have said that you can be a member if you have staff in the House of Lords, MPs - MSPs

[Kevin Reid interrupts] - but we don’t think that’s good enough. Therefore we called for ... regulation by the Scottish Parliament. That hasn’t made us particularly popular with those consultancies which employ MPs, Members of the House of Lords as you can imagine". (Observer transcript 1999: 10).

Beattie Media’s call for the statutory regulation of outside interests was seen almost universally as a publicity stunt, which was backfiring spectacularly in full gaze of the Scottish media and political class.

In front of the Standards Committee Gordon Beattie claimed that Public Affairs Europe had no clients. Soon afterwards he insisted that he was no longer in the lobbying business (though the number of public sector PR contracts he held suggests otherwise) and was concentrating on building the PR side of his company. This strategy suffered a major set-back when three senior managers left over a dispute about employee dividends, and set up their own company, the BIG partnership, and taking with them several of Beattie's old clients.

Beattie is also a Director of Decus Ltd