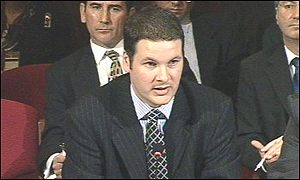 Barr under pressure at the Standards Committee investigation of 'Lobbygate'. the committee were unable to determine if he was telling the truth

Alex Barr is a former employee of Beattie Media and a founder and director of the Big Partnership. He was named in the Glasgow Top 100 Most Powerful People in January 2005. [1]

"With the exception of Kirsty Wark, most... people ..cultivate a low public profile - but that doesn't stop them having a major influence on how we see the world. If you read newspapers, watch TV and listen to the radio, they've shaped the news of the day". This quote taken from the Evening Times article (25 Jan 2005) is an apt summary of the importance of the unseen hand of PR in shaping both the content and editorial slant of public news and information.