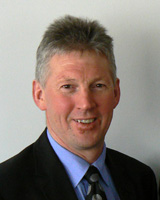 George Lyon (born 16 July 1956, Rothesay) is a senior consultant at PR and lobbying firm Hume Brophy and a former MEP for Scotland from Liberal Democrats.

Lyon was a member of Scottish Parliament for the Scottish Liberal Democrats in Argyll and Bute from May 1999 to May 2007, where he lost to Jim Mather of the Scottish National Party.[1]

On the 12 January 2015 he was announced as a senior consultant to the agri-food practice at PR and lobbying firm Hume Brophy, and will be providing corporate communications and government relations support to the sector.[4] The Herald (Scotland) reported that Hume Brophy "counts controversial multinational Monsanto as a client". Alan Smyth, a Scottish National Party MEP, said: "George is free to be as extreme on GM as he likes, and is free to voice his view, but he should be open about whose shilling he is taking. George has every right to be Monsanto's mouthpiece, but his views should carry a suitable hazard warning label so people can judge how impartial those views are."[5]

Lyon is an outspoken supporter of genetically modified (GM) crops. In early 2011 he hosted a "debate" in Brussels on the health and environmental impact of GMO cultivation and was the major cited source of a newspaper story that had this breathless opener:

Europe's farmers are being left behind as the rest of the world embraces the potential of genetically modified crops to boost food production, reduce inputs and protect the environment. That was the claim from Scots LibDem MEP George Lyon, who this week hosted a debate on the health and environmental impact of GMO cultivation in Brussels.[6]