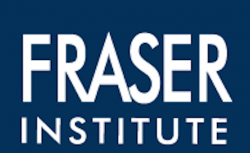 Established in 1974, the Fraser Institute is a free market neoliberal think tank with offices in Vancouver, Calgary, and Toronto. According to its own account 'Today, government committees, MPs, the media, and think tanks around the world turn to the Institute for their innovative ideas and solutions. In raising the level of understanding about economic and social policy, the Institute's ideas contribute directly to the economic well-being of individual Canadians'.[1] The Fraser Institute is in the Economic Freedom Network alongside organizations such as the Cato Institute and the Open Republic Institute.

The institute has been accused of being a front group for the tobacco industry[2][3].

The Fraser Institute says its aim is "A free and prosperous world through choice, markets and responsibility". On its website it describes its activities as follows:

The Fraser Institute measures and studies the impact of competitive markets and government interventions on individuals and society. Our peer-reviewed research is distributed around the world and has contributed to increased understanding of how economic policy affects people.

The Institute is an independent non-profit research and educational organization. We do not accept government grants or contracts for research. We depend on contributions from thousands of individuals, organizations, and foundations. [4]

An article by Donald Gutstein of Simon Fraser University examines recent rises in funding for the Fraser Institute. The Fraser Institute has sought and received funding from several tobacco companies, including Rothmans, British American Tobacco and Philip Morris, according to a 2000 letter found in the tobacco industry documents.

In 2003 the Fraser Institute's income was $6,620,038. In its annual report it discloses that 52% was from unspecified foundations, 38% from unspecified "organizations" (presumably corporations) and only 10% from individuals.

While ExxonMobil discloses in its annual statements that it contributed $60,000 to the organisation to work on "Climate Change", the Fraser Institute does not explicitly disclose the contribution.

According to Media Transparency between 1985 and 2003 the Fraser Institute has received 30 grants totalling $ 403,301 (unindexed for inflation) from the following U.S. foundations:[5]

According to Candian Broadcaster CBC News:

The Fraser Institute has come under harsh criticism from several groups. Trade unions have lambasted the organization for its recommendations to abolish minimum wage regulations and to end rules that force workers covered by a union agreement to pay union dues.

In 1999, the Fraser Institute raised the ire of scientists and health professionals when it sponsored two conferences on the tobacco industry. They were titled "Junk Science, Junk Policy? Managing Risk and Regulation" and "Should government butt out? The pros and cons of tobacco regulation." The institute was accused of putting its credibility on the line by allying itself with the tobacco industry's efforts to undermine credible scientific research.

The institute has also come out with some surprising recommendations: it declared the war on drugs to be lost and called for the decriminalization of marijuana. Its researchers argued that illegal pot meant a boost for organized crime, as otherwise-law-abiding people went underground to make their purchases.

The Fraser Institute has a history of attracting high-profile people. Michael Walker remains at the head of the organization. Former Ontario premier Mike Harris and Reform party founder Preston Manning are both senior fellows with the institute[6].

Sponsored 2007 conference with counterjihad activist and writer as keynote speaker

The Canadian Islamic Congress and the Canadian Arab Federation protested the Fraser Institute-sponsored "Immigration Policy, Border Controls, and the Terrorist Threat in Canada and the United States" conference in Toronto, Canada, in June 2007, at which Bat Ye’or was keynote speaker. The Muslim and Arab groups issued a joint statement urging the barring of Ye’or from entering Canada.

"The blatant bigotry in this gathering of speakers is clearly apparent," today's joint statement said. "They were chosen for their mutually negative views regarding non-European immigrants and in particular the Muslim and Arab immigrant community"[7].

Jason Clemens is the Director of Fiscal Studies and the Centre for Entrepreneurship and Markets at The Fraser Institute. Internally, he also acts as the Director of Strategic Planning and Budgeting.

Peter Cowley is the Director of School Performance Studies at the Fraser Institute.

Nadeem Esmail is the Director of Health System Performance Studies and Manager of the Alberta Policy Research Centre at The Fraser Institute.

Amela Karabegovic is a Senior Research Economist at The Fraser Institute.

Sylvia LeRoy is a Policy Analyst in the Fraser Institute's Alberta office and Project Manager for the Donner Canadian Foundation Awards for Excellence in the Delivery of Social Services.

Fred McMahon is the Director of the Centre for Trade and Globalization Studies at the Fraser Institute. He manages the Economic Freedom of the World Project and examines global issues, such as development, trade, governance, and economic structure.

Milagros Palacios is a Research Economist in Fiscal Studies at the Fraser Institute.

Niels Veldhuis is Associate Director of Fiscal Studies and Senior Research Economist at The Fraser Institute.