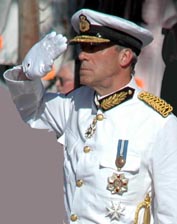 Sir Francis Richards was Director of Government Communications Headquarters from 1998 to 2003.[1]

Richards was one month into the job at GCHQ, when 29 people were killed in the Omagh bomb. In 2008, it was reported that the bombers had been under phone-tap surveillance by GCHQ as they crossed the border from the Republic of Ireland to plant the device. The BBC's Panorama programme claimed the evidence was never passed on to police.[1]

Richards sits on the international advisory board of Altimo, an investment business owned by Alfa Group of Russia.[2] According to the Daily Mail, Altimo is "controlled by Russian oligarch Mikhail Fridman, a leading figure in energy group TNK which had a spectacular falling-out with BP" in 2008.[3]