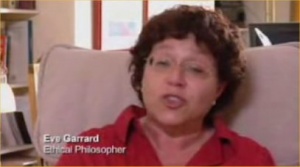 Eve Garrard took her first degree at Lancaster University in English and Philosophy and an MPhil in Moral Philosophy at the University of Manchester. Her main research interests are in moral theory and also in philosophical issues related to the Holocaust. Before taking up her post at Keele she worked for several years for the Open University, and has a special interest in teaching philosophy to beginning students. She is currently a member of the Royal College of Pathology Ethics Committee. Her Keele biography states:

Eve Garrard is a moral philosopher who currently teaches in the Centre for Professional Ethics at Keele University. She was born and grew up in Glasgow. She came south to England to go to university, and has remained here ever since. Her research interests are in moral theory, bioethics, and issues arising out of the Holocaust, in particular issues to do with evil. She is married to the historian John Garrard, and has a grown-up son who is an architectural conservationist.[1]